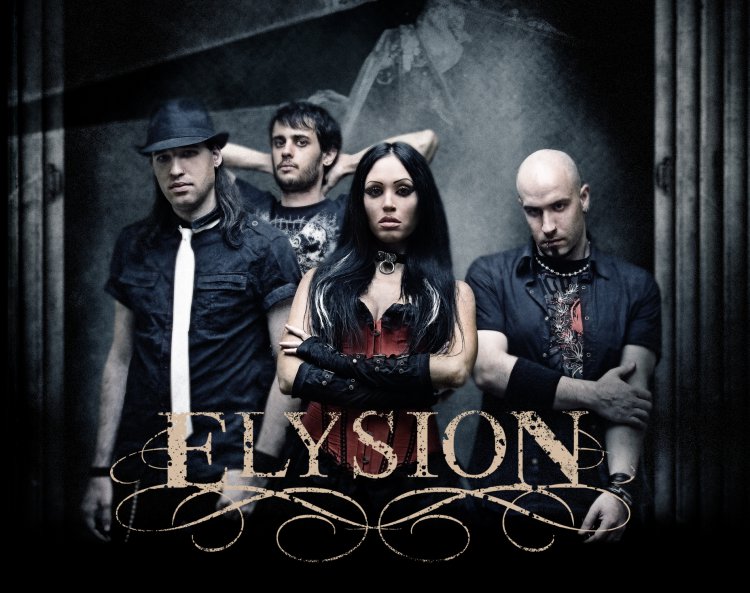 You’re a very popular band in Greece, but how do you present your band here, to people, who come for your concert for the first time?

Christianna: Well, actually, this is our first time to Russia, and it’s a great honor to come here, so we are really thankful for being invited here. At first we were thrilled of being here, but the previous show in Moscow was such a pleasant surprise, ‘cause we ourselves hadn’t expected such a warm welcome. And we hope that this is just a beginning for ELYSION making more and more friends here and we hope that it also a beginning for a number of gigs to come in Russia.

I hope so. And which countries have you been to?

Christianna: Well, for the time-being we’ve made some kind of a little break, ‘cause we had to prepare for a second album which is ready, so we are just waiting for the release. So, except Greece, the very last time that we went was a participation in Metal Convention that goes on every year in Wales, which is a hard-rock fest, and that was quite an experience for us.

Have you stayed in Moscow for a long time?

Christianna: Well, we arrived on Thursday’s eve, on Friday there was a show, and yesterday we had a train to Saint-Petersburg, and here we are.

And in Saint-Petersburg, how long are you going to stay?

Christianna: Unfortunately, tomorrow we’re going home. We wished to stay more to take a good look, see the surroundings and beautiful places, we took a few walks, but it wasn’t enough, we wish we could stay more.

Christianna: Actually, we expected colder weather both in Moscow and here, but we were surprised to see it’s quite warm, especially, today. So it’s sunny, and it’s feel like in Greece :) I don’t know if it’s a common weather for Russia.

Christianna: Yeah, we’re lucky :) We’ve brought something of Greek’s weather with us.

And while staying in Moscow, have you been to some clubs or to sightsees?

Christianna: We didn’t have enough time, unfortunately, to do it, and we’ve stayed quite far from the center. When we arrived, it was a night and it was too late to go somewhere. 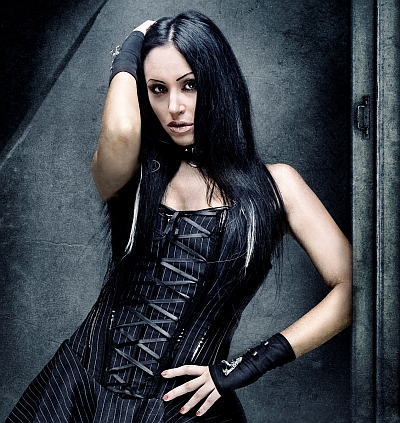 And during your staying in Russia, have you learnt some Russian words, may be? :)

Christianna: «Wodka» we know all ready. And when you say “Thank you”, except you say «Spasibo», you say «Khorosho», does it mean a different thing?

Christianna: Actually, since you asked, yesterday something very funny happened. We were travelling by train from Moscow to Saint-Petersburg , and we had quite a few hours of boredom in the train, so our drummer and Illias were bored, and I saw them trying to solve the Russian crossword in the newspaper, but they didn’t understand anything.

Christianna: They took the newspaper, turn the other side, where there were the solutions, and they were copying them in crossword and then they were trying to read them. So I think it was pretty funny for all the passengers of the train, because they could hear us trying to speak and make our vocabulary, so it was a hilarious thing, very funny. It was fun for everyone, ‘cause we made fools of ourselves, so it was amusing.

FXF: And we killed some time.

And about today’s festival. There are so many bands today, at “Female Vocal Dream Metal Fest”, so what’s unique in your band, what are your main features?

Christianna: I think, it’s a chance for someone to find in music what he or she personally likes. Every band has something special, and it’s better to see live than to describe it. If I had to pick something out, may be, the energy of songs, I think they are quite groovy, and it helps live performance, ‘cause they easily approach the live performance. For today’s show we also have two songs, from a new album. One of them is the title of the album, we hope that everyone will like this one. And we are looking forward to play them, because we have only a studio version, and we have never played them in live. And we want to see, how it goes.

I’ve enjoyed one of your covers, “Mein Herz Brennt”. Are you going to play it today?

Christianna: Yeah, it will be.

And do you have any other covers?

Christianna: In the past we played different covers, depending of the gig. We mostly covered songs that were played by bands without female vocal, because we didn’t want to sound like somebody else, and we mostly picked songs that we liked, we had grown up with them, but we have got stuck with a Rammstein cover for quite a long, because there is something that suits us, so close to us, that it feels that it’s a part of the album, and it is great to hear that people expect us to play this. So we are still playing it, and let’s hope that tonight it was a pleasant break from the album songs too.

And what do you like more – your own concerts or big festivals?

Christianna: I don’t think that there is too much difference, we feel the same love and energy, so it is the same joy, no matter if you play for 50 people or for 5 thousand people. You know, it is the same honor. But sometimes, especially, in small clubs, it is warmer, so it’s better. Actually, we really like this club, it’s a good place.

And what’s about starting of your band?

Christianna: Johnny Zero, our guitarist, started a band with a name “ELYSION”, as it is today, with a fronted senior, Maximilian, they started at 2006, they started to recruit people and recording songs. They made a very good approval with a demo, so they got nice credits by magazines and general approval by people, they were awarded the Metal Hammer for their first demo, so it’s helped a lot. So once they’ve started to record the album, they gained a lot of interest from a lot of labels, so after a little while they signed with a German Company. And I’ve joined the band after Maximilian.

Speaking about the songs, what are you inspired by? 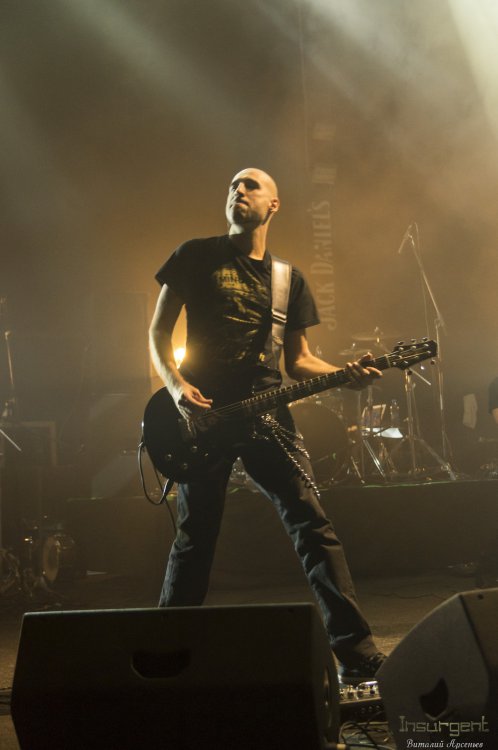 FXF: I’m not a lyricist, I’m a composer.

Christianna: Except this album, in which I had to do with the lyrics. I think that Elysion’s atmosphere is human-approaching one, it’s full of human feelings, especially, in this album I think we can find references to a human nature, the good and the bad. The music and the lyrics are very simple, so it’s their beauty, actually. Everyone can understand them and see something related to his feelings.

There is a statement “Art never comes from happiness”. Do you agree with this statement?

Christianna: Yeah, I see this point. Sometimes it’s easy to compose something of what you feel, when you’re depressed, because heart is supposed to be more expressive, when you’re sad. Elysion is not the very optimistic band. I think that all the powerful feelings can create art. You have to be very sad or very enthusiastic.

How does the metal scene look like in Greece? Are there a lot of bands? What’s with promotion?

FXF: We have great bands and great musicians.

Christianna: Over the past years, I think that there was a break out of Greek bands, they took steps outside Greece and managed to sign contracts with great labels. But I think it’s still a very difficult thing to support a band, and be really ambitious starting from Greece, and you should prepare to make a lot of sacrifice and work very hard, because it’s not a mainstream sound for typical Greek society, so you have your competition, but it is a beauty, I think. Because it shows that you have to win it. This makes you better.

And the last question, what can you say to your Russian fans?

Christianna: All we can say to our new Russian friends is a great thank you, we haven’t expected such a great welcome. So we want to thank them for welcoming us in your country, and we promise that we will do our best not only tonight, but all the future time we will be here.

Hope, that you’ll come to our country with another concerts.

Christianna: We hope too :) 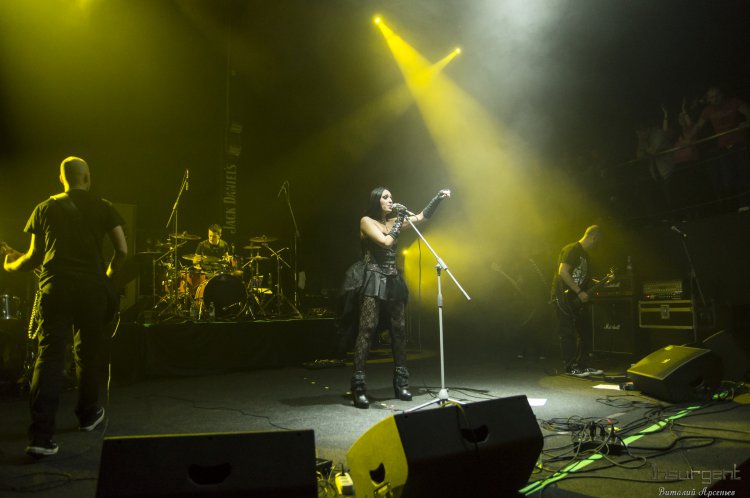