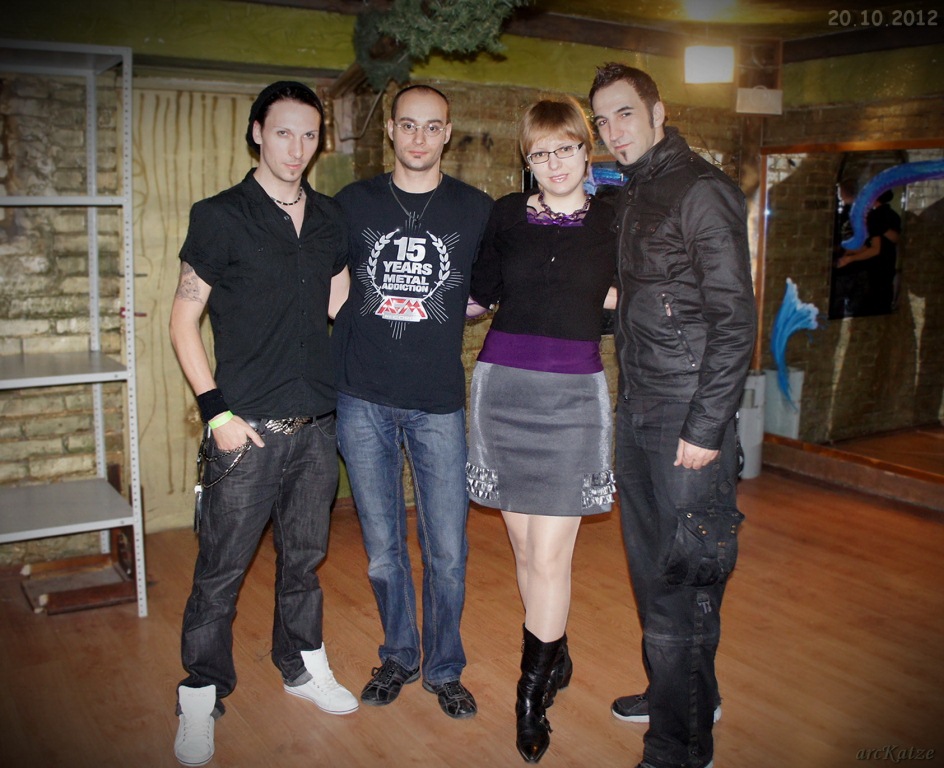 “Stahlmann”, the metal-band from Germany, has visited Russia at last! In spite of the fact, that the musicians have never been in our land, they have many Fans here. To listen to dark electrobeats, “steel” guitar-solos and deep vocal live, many people came to the clubs in Moscow and St. Petersburg. We succeeded in communicating with the band on 20th October, 2012, before the concert in “Arctica”-Club (St. Petersburg). Let's learn more about the band itself and about its members.

-Your cherished desire has come true: now you are in Russia! What impressions have you got?

Mart: We are in Russia, it's cool! Yesterday we met a lot of wonderful people and visited a lot of wonderful places in Moscow: the Red Square, the Kremlin, went for a walk through the city, speaking to different people. We also saw street musicians, dropped in a Hard-Rock-Cafe and drank coffee...

Mart: Of course, much Wodka! (Laughing.) Well, we enjoyed ourselves a lot!

Tobi: The same impressions, we were together all the time.

-Why did you want to visit Russia?

Mart: We have a lot of fans here. I'm managing our official Facebook-page, Ablaz is dealing with our fans on Vkontakte.ru. We have been noticing for a long time, that many Russian people would like to come to our live-concert. We also communicate with our fans in Russia very well, we wanted sure to come to Russia one day!

-What are you expecting from the today's concert?

Mart: I hope it will be wonderful just like yesterday's one. (Everybody's laughing.) There was an amazing event, we would have stayed longer if we hadn't to hurry to catch the train to St. Petersburg. Now we are glad to give a concert here! The party will be cool!

-You are first in Russia. What countries have you visited yet?

Mart: Of course Germany, Austria, Switzerland, Russia now, then Czech Republic is next in turn. We are on tour now.

-Remember the feelings you experience being on a stage n front of hundreds or even thousands of people who are dying to look at you, to listen to you. What do you feel in such moments?

Mart: Happiness and pleasure. You have no time to analyze, you are just enjoying the moment. 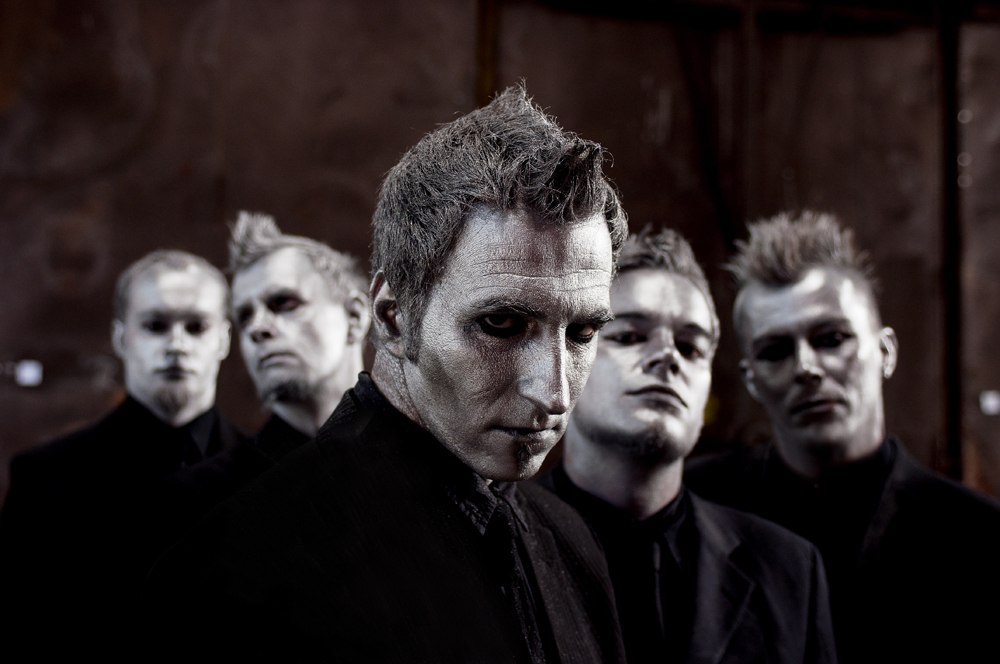 Ablaz: Before entering the stage, I am always excited and strained. I am trying to do my best and to rock with people!

-As far as I know, Mart and Tobi – you write music together, but for the live-shows you get different musicians involved in the work. What musicians have you dealed with? What bands are they from?

Mart: No-no, all musicians are from our band, but in the last two or three years we had about one hundred and fifty concerts – it is very much, and the musicians are playing in other bands too. For example, Ablaz is a member of the UK band.

-I have heard that Shumon from “Tanzwut” was playing with you for some time.

Mart: Exactly. As I've mentioned, Ablaz is playing in the UK band, our drummer Taki has a music school that demands a lot of time, that's why we have two drummers and three bassists in common. Our second drummer Nick was at that moment on tour with his band OOMPH!, and we asked Shumon to help us. Since we and guys from “Tanzwut” are friends, Shumon agreed and took the place of Nick during our recent tour.

-What bands are you friends with?

Mart: Oh, there are a lot! I don't know who to begin with. If I start to enumerate them I will surely forget any band and the guys will be angry. (Everybody's laughing.) There are many-many musicians and bands who we are friends with! Let us suppose, I say: “We are friends with “Tanzwut”\”Megaherz”, then Dero from OOMPH! comes and says: “Why are we friends no more?” We are friends with almost all bands we go on tour.

Ablaz: If there is mutual understanding, you will become friends very quickly. On tour there is a lot of time to spend together.

-How did you begin to play music, to love it?

Mart: Like all other bands. We began to write songs, then recorded them and laid out to the Internet. The reaction was very quick and very positive. The we started to play live-shows, invited our friends, a drummer and a bassist, then our first album was released, we got to the charts... And now we are in Russia!

Ablaz: In my time I was listening to different music, watching a lot of different live-shows and then I wanted to be a musician. I bought a guitar and started to play and to study. Then I wrote my first songs, played my first live-shows in big and small clubs... at first in small ones, of course. (Laughing.)It was becoming better and better... and now we are sitting here in Russia! 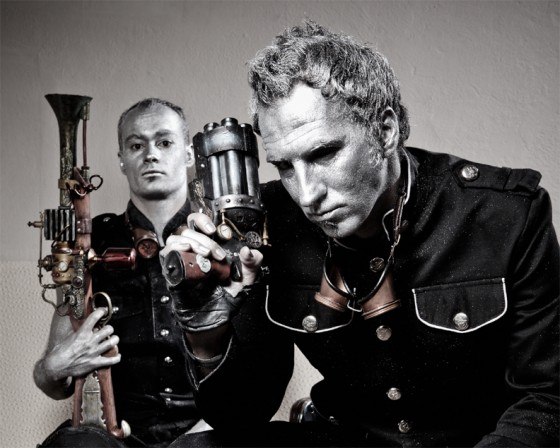 -What would your occupation have been, if you hadn't been musicians?

Mart: I am able to nothing besides it. (Laughing.)

-Have you got such a dream?

Ablaz: No, such talent! (Everybody's laughing.)

-You have a specific image on the stage. Are you going to change it in the future?

Mart: We will probably change something to the next tour. We have many ideas but we must make a decision. We are recording now a new album that is likely to be released at the beginning of 2013. Till this release our new image is a mystery.

Ablaz: You have to visit our new concerts and see all changes by yourselves.

-I liked your official clips very much. There are a lot of beautiful girls there. Could you share your plans about the next clips?

Tobi: The same as about the images and costumes. We are thinking of them.

-Who is waiting for you at home? Your family, friends, a hamster or beautiful girls who are cooking tasty dishes for your return?

Mart: I'm a dog-fan. (Laughing.) But my dog is already a little devil, his name goes very well with him.

Tobi: I am getting tasty dishes.

Ablaz: As for me, I will be very glad to be at home again after a long tour. I'm going to make a party for my friends. It will be cool!

-Thanks a lot for our conversation. It has been very cheerful and interesting. Good luck on the concert! I hope you will visit Russia one more time.

Ablaz: I enjoyed our conversation too.