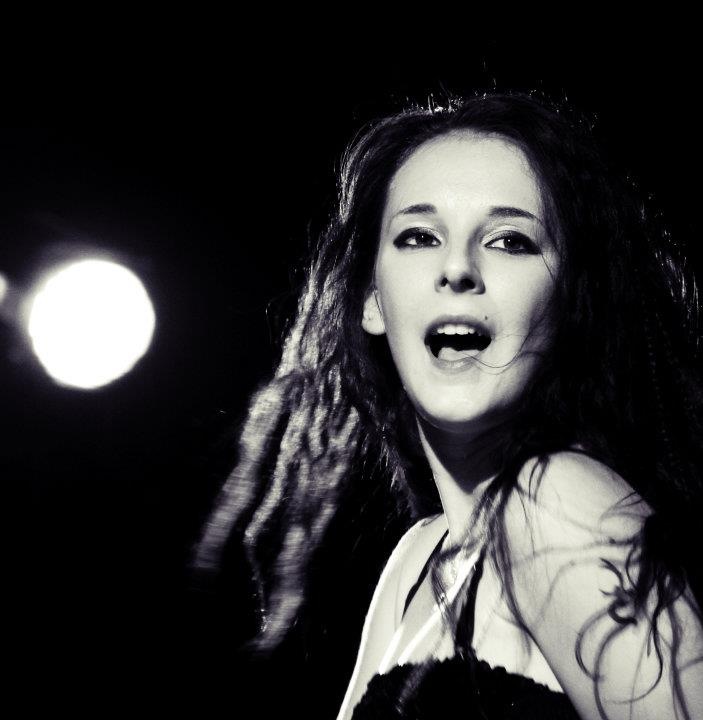 We had a lucky chance to take an interview from the Italian gothic-rock band THE SHIVER during their visit to St.Petersburg on November, 9, 2012. That concert was organised by means of the Rain Embrace Concert Agency. There are four musicians in the band: Federica Sciamanna (vocals, guitar, music and lyrics), Francesco «Finch» Russo (drums), Michele «Micky» Colantuoni Erre (bass guitar), Vincenzo «Vinz» Lodolini (guitar).

Welcome to Russia, we are glad to see you again. As far as I know, this is your third visit. First tour as opening for Americans Papa Roach, second - concerts in three cities in Russia, and now your own tour in the three countries of the CIS. What are your impressions?

Federica: First main impression: that it was so much people, who came to rock! Who want to go to concert and enjoy music. Second thing: for us in west Europe Russia seems so far, but in the end rock-people are very similar and we have great feedbacks every time we are here. And third impression: we met such amazing and kind persons who worked with us in organizing gigs.

Why is Russia so good?

Federica: We love to play here, because people show their love without shy. It’s a really cool feeling when crowd feel your music and believe in it. Russia was the last part of Europe and the first part of Asia for us to “conquer”. =) Inbetween, Russia is a really magic country.

How many days have you spent in St. Petersburg? And what's interesting you've done?

Federica: Three days. We had a little sightseeing, one interesting thing was the metro station. It has been the first place we saw, the long corridors and deep stairs are marvelous: they seem to get out directly from 1800. We visited Palace Square and saw the beautiful Hermitage. We really liked the bridge and the Vasilievskiy island. Also we enjoyed the time in pub “Stoker”. During the second day, we had rehearsals in the city and it’s been really interesting as me and Finch are opening a rehearsal place in your city right now!

How was St. Petersburg’s concert?

Federica: The club was really cool, great backstage, amazing stage and the sound engineer was ACE!!! The crowd was really energetic and I think they enjoyed the show, however WE REALLY ENJOYED!!! We played for the first time live one track from the new album (in premiere), one Special Track (Embrace) and after so long we played again Embryo (a track from Inside, our first Album). AMAZING!

Tell us about the new album.

Federica: This new album will be so much different from “A new horizon” (last one). I put more attention in instrumental parts, mixing our rock with a little of post-rock. There is also the influence of darkwave and the sounds are more elaborated. The name of the album will be “The darkest hour”, it will be produced by Vinx from the band Vanilla Sky and we will enter in the studio as soon as we get home from Russia. We can’t wait. I worked on the tracks during the last year while many things changed, I guess that you will feel that from the songs! We will announce soon the release date and you can keep yourself updated from our websites! 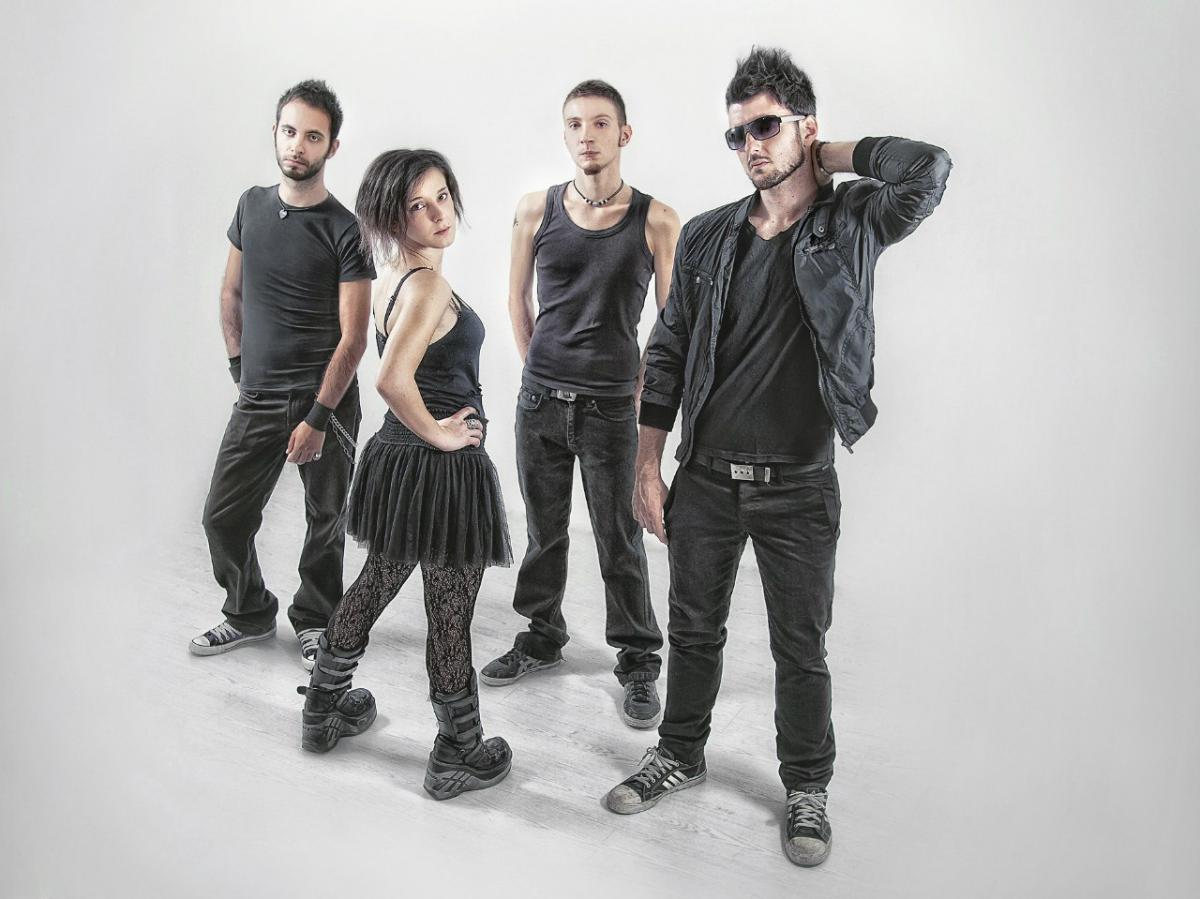 Do you have some ideas for new videoclips?

Federica: It’s quite strange 'cause I have actually an idea for a videoclip but not for the first single! In the album there will be a song called “Over” and if we find the right videomaker I want to go to shoot the video in Barcelona. It’s kinda soundtrack so it will be really interesting to make this video in the Barrio Gotico (gothic district).

How did you choose your style?

Federica: I grown up with dark wave and rock from the 90s, then I started to listen to metal music even extreme, and then in the last years I experienced electro, so this is the result! And I’ve always loved Goth culture. What I can write is extremely full of melody but I won’t ever left behind the sound of a good guitar distortion! And Finch has developed his style and now his groove is very rock! So this fits perfectly! You have to listen to the new album to taste the difference from ANH! The Darkest Hour is coming soon!!!!

And what do you do besides music?

Federica: I am a music teacher. Me and Finch are opening a Rehearsal place and a music Centre (with booking agency too), we will have the GREAT OPENING on the 1st of December and we’re very happy 'cause we worked on this since so long!

Finch: I am a drum teacher and a sessionist, and as Federica I’m very happy about the Backstage Academy.

Micky: I am a student (X-Ray Technique).

Vinz: I play as sessionist for other bands and I have a melodic black metal band Oblyvion. 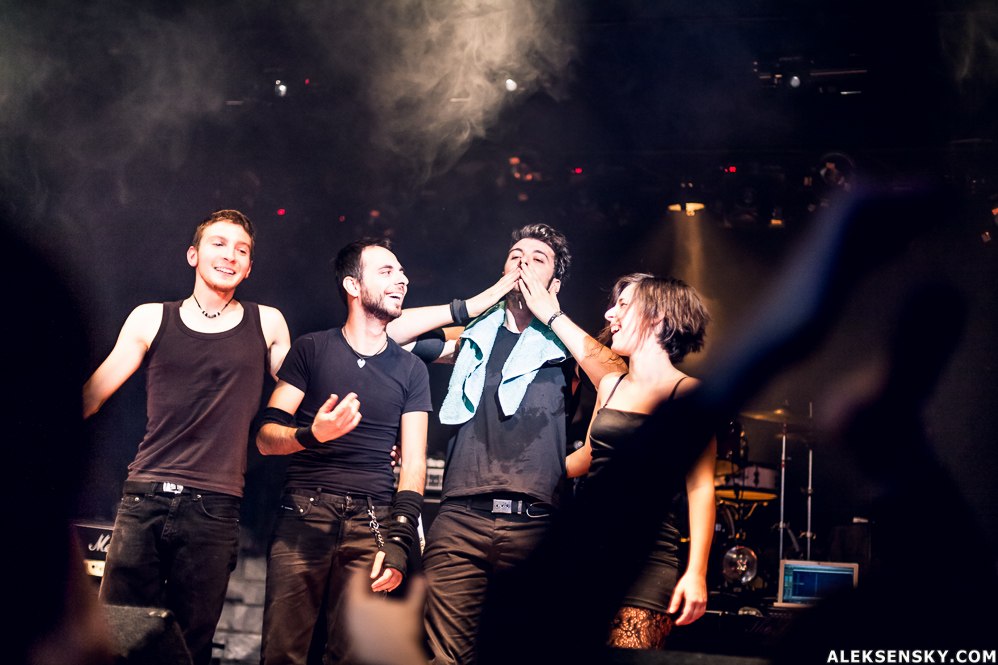 What do you think about singing 2-3 songs in your own language?

Federica: Well, since I started to sing and to write, I do it in English, it’s a matter of influences (I’ve always listened to foreign bands). Then, the sounds and the metric are completely different and if I have to sing in Italian, I have to write in Italian, buti think it would be interesting! Maybe for a solist project in the future! But I need to have good inspiration 'cause it’s very simple in Italian to be obvious.

What would you like to say to your Russian friends?

Federica: We really really enjoyed Russia! Everytime we are here we have good time! You people are amazing and I wish to come back as soon as possible to bring you our music! Travel as much as you can and go to visit places in Europe 'cause I think you could find many interesting things (Berlin, London, Rome, Barcelona!) in the music scene! Keep following us in vk/theshiver or fb/theshiver!!!

Micky: You rules! I really had great time!

Vinz: I enjoyed so much being here! I hope to come back soon!

Finch: Thank you so much for your support, see you very soon and Keep your Groove!