Without doubt we may say that Wave-Gotik-Treffen is the most important event for gothic subculture. This year was 22nd time for WGT to become the huge gathering of goths and 1st time for insurgent.ru to be a part of this really extraordinary event. People from all over the world prepare fantastic dark outfits to go to schwarzes Leipzig and be a part of this cult event. WGT is not only music performances, it’s more than just a festival, it’s Treffen (gathering), so the whole city is under dark control of gothic subculture. We hope to demonstrate it in our report, at least a little part of this dark fascination of Leipzig!

First day of WGT as usual was Friday and for us became the day of electro bands. It was a little bit hard to dance after long way from Russia, so we’d recommend you coming at least one day before the beginning of main WGT Program, you’d have chance to have a rest, to see the city, to visit pre-parties and next day to be fresh and ready to dance until dawn. ;) At the first day we started our program with main stage of festival, Agra Halle, and the first band we saw on stage was Das Ich. This band was headliner at WGT many times and now we had a chance to see them live too. High quality and musical talent always set the bar for thousand musicians guided by the experience of pioneers of darkwave. This year stage performance of German monsters didn’t fully meet fans’ high expectations. But anyway seeing them live on stage was a great pleasure. Frontman Stefan Ackermann was back on stage after cerebral hemorrhage and coma. That fact that he could continue his music career became for many fans a real miracle. That’s why Agra Halle this evening was full of fans who were waiting their comeback so eagerly. 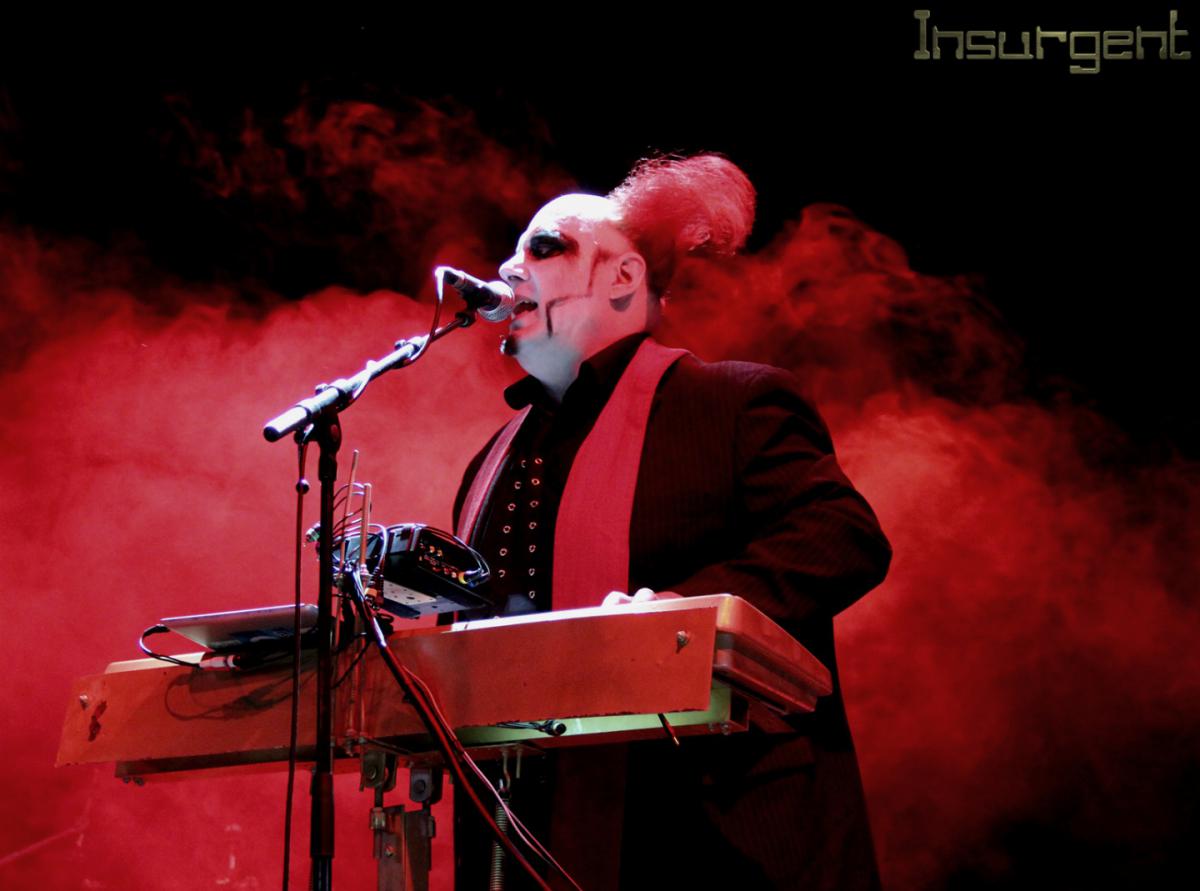 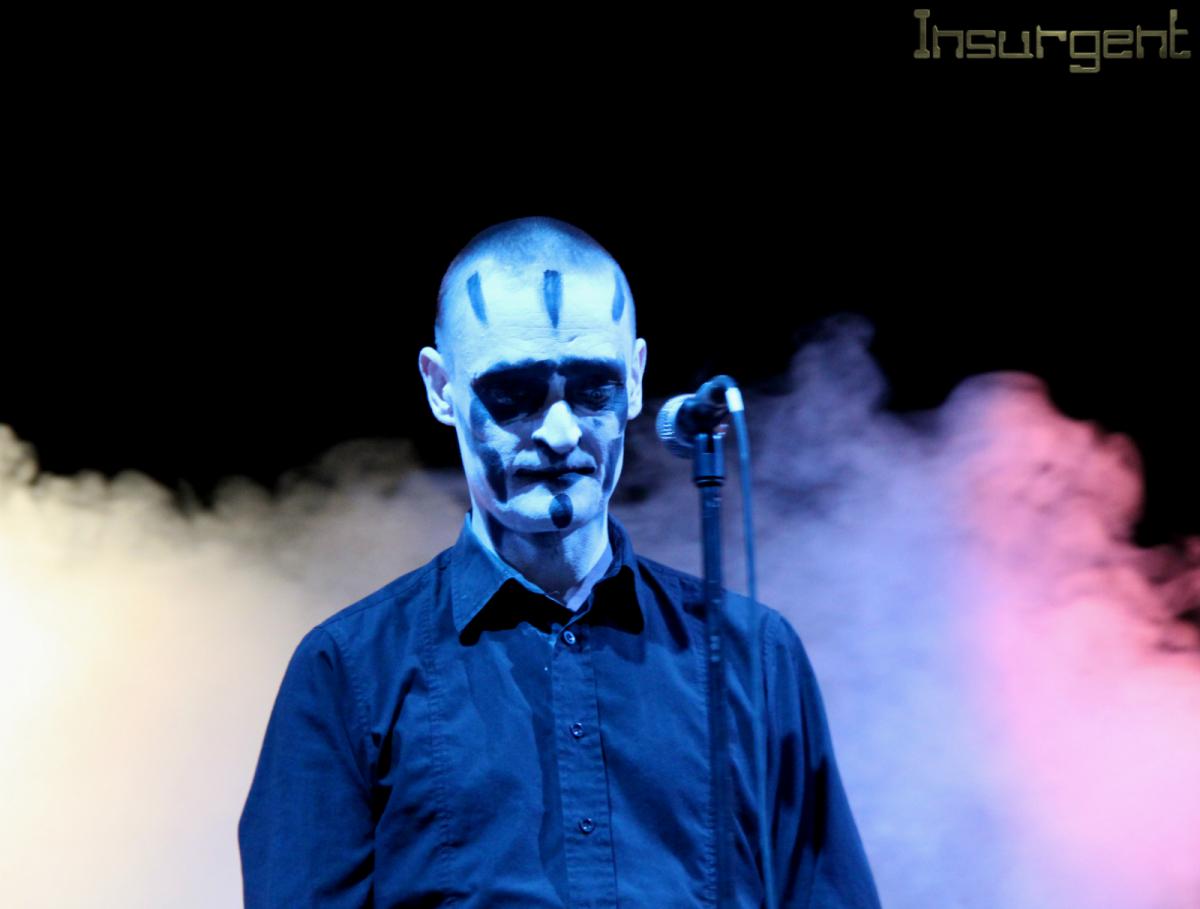 We left Agra Halle and headed to Kohlrabizirkus where we saw last part of American band’s Bruderschaft performance. It was hard to form an opinion about the band, ‘cause we saw only 2 songs performed, but the band had a great support of their fans who didn’t want they to leave stage so soon. Our main goal at this venue was In Strict Confidence show, this band always rocks on as one of the best representatives of their music genre. It was impossible to take your eyes off the charismatic frontman and unforgettably charming frontwoman. Her pristine voice and slightly bitchy way of die-away beauty created quite explosive contrast. Needless to say that the audience was bursting into applause after every song. Acoustic of venue was an obstacle for sound engineer to create a flawless sound, but the energy and passion of stage performance made it less important. It was great to discover that the band feels free to play with oriental motives and (what was really surprising) dubstep-elements, their songs included choruses in Russian, and the visual elements of the show – video background - was the perfect complement of the performance. Everything showed us that In Strict Confidence was really authoritative band on German dark stage. 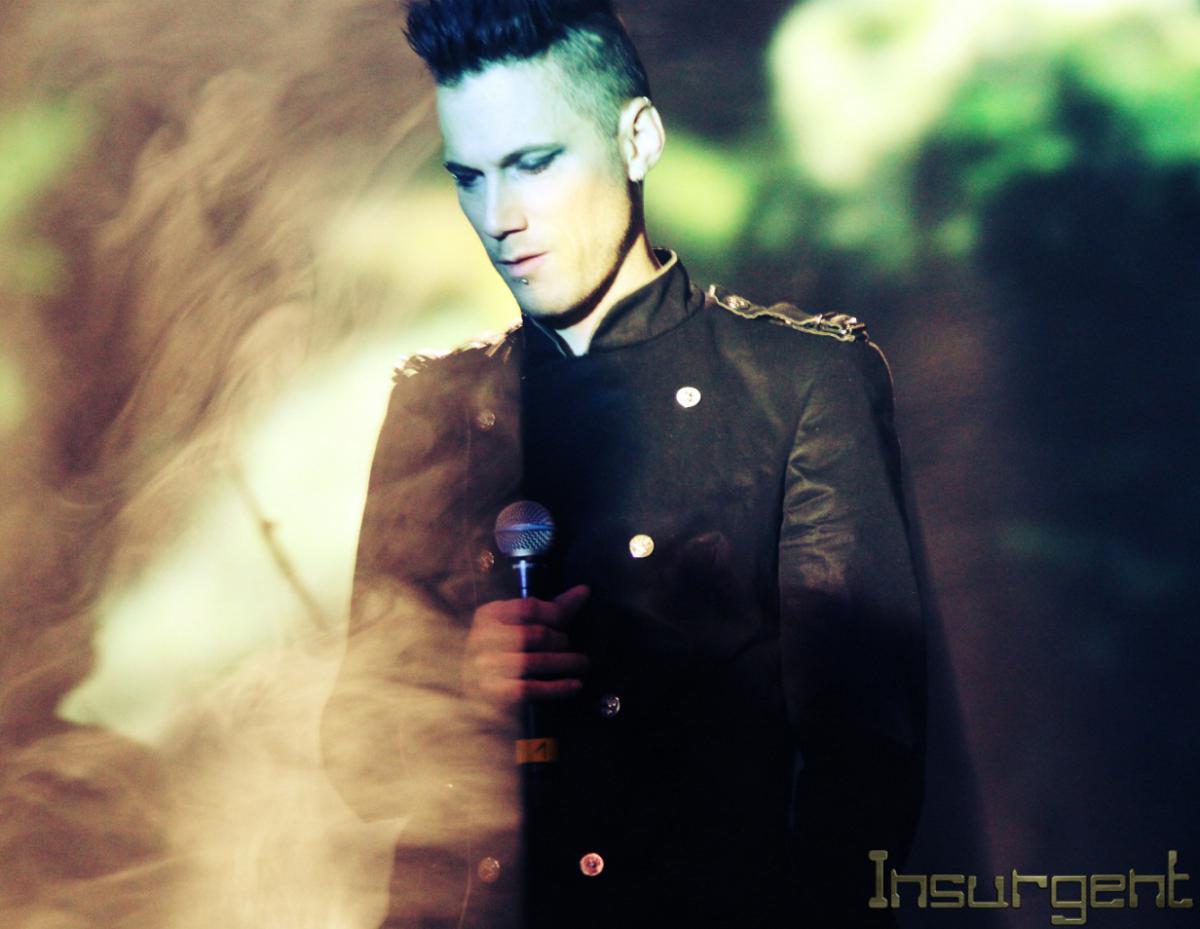 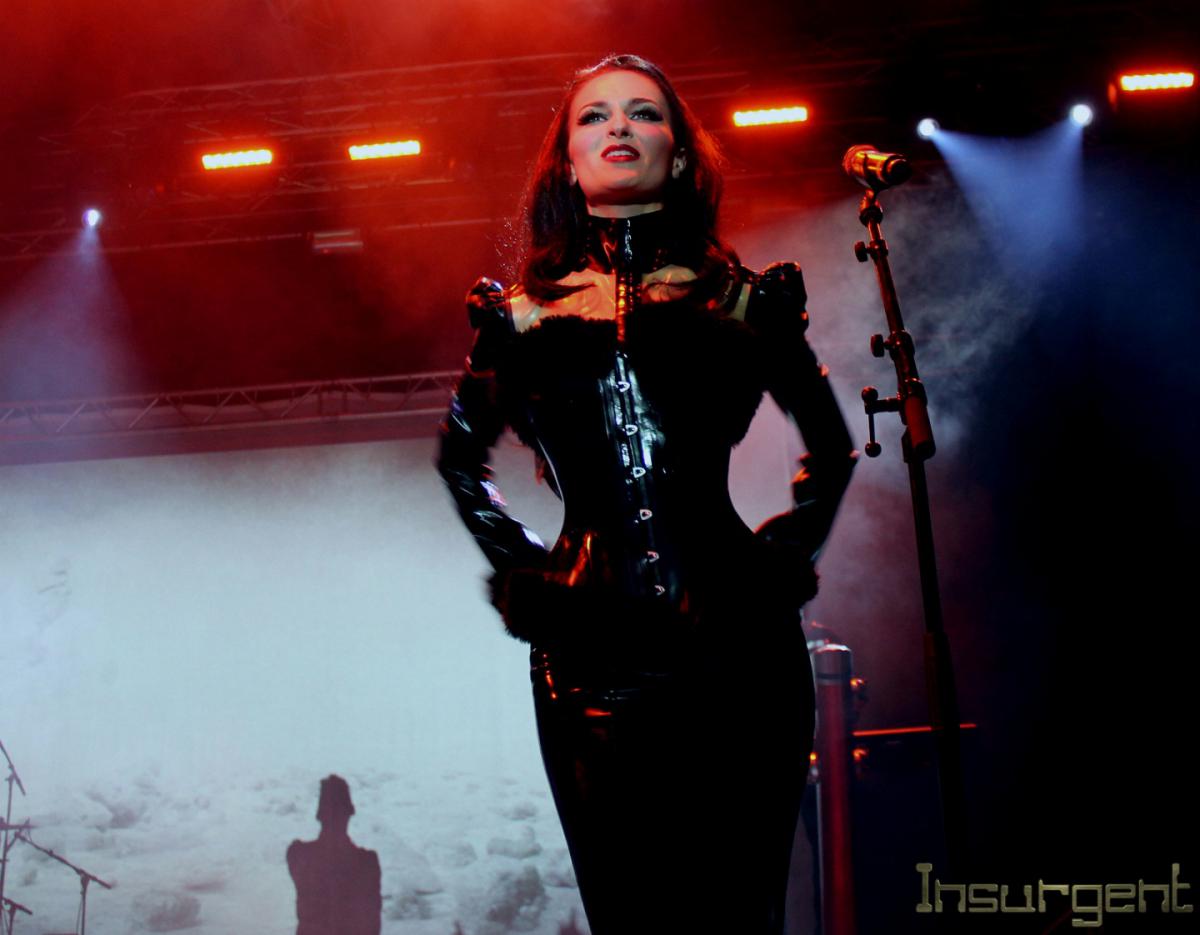 Our time at Kohrlabizirkus was up, we had to hurry up to see And One at Agra Halle. The performance was based on 2 components: vivacious synthpop of 80ies and harsh German alternative dance music of today. Catchy melodies, rhytms and lyrics were always reasons for And One to be on top of the charts. As we have noticed, there’s a tendency among European electro bands to use live drums during stage performances. Sometimes we see half-electro drum set (as we saw at And One performance), sometimes full, but it becomes part and parcel of live shows of electro bands. 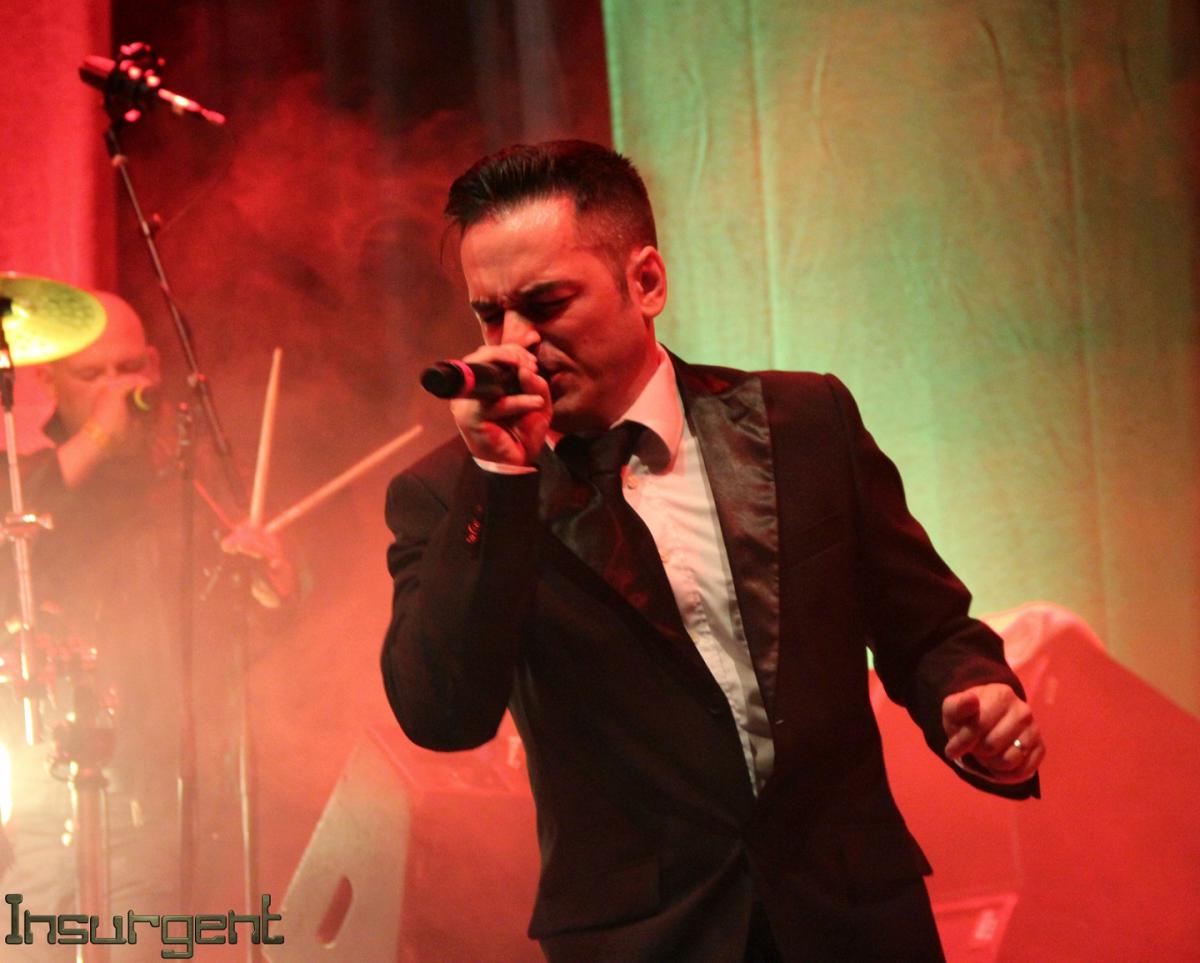 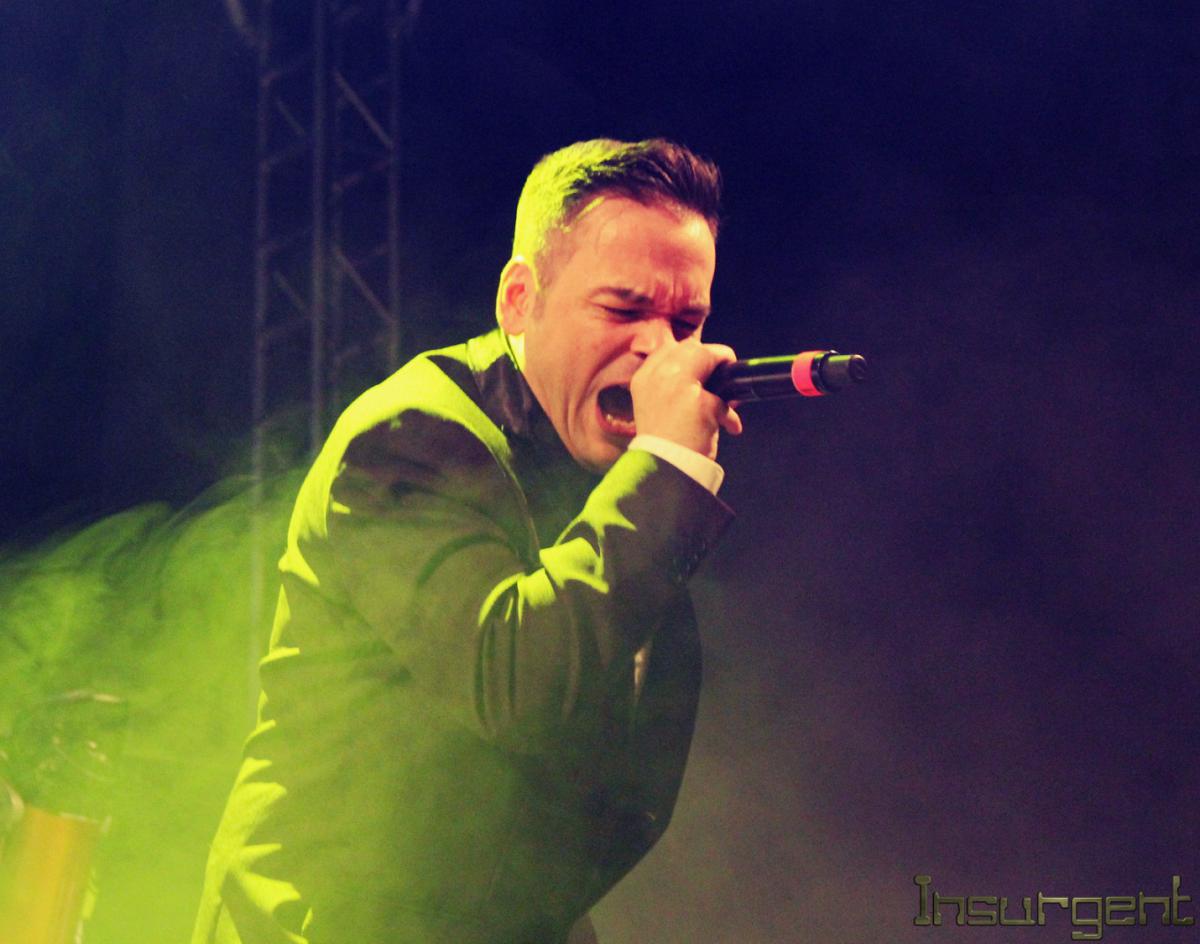 Probably, one of the reasons why WGT became the largest European dark festival is that organizers not only concentrate on classics of gothic music, but also monitor the newest trends in the subculture. As we can see now gothic subculture has great influence on so-called hipster music. Now gothic subculture, it’s obvious, has a very blurred boundary. Our second day was dedicated to so-called indie music, that can be identified as indie with strong gothic influence. We have to say that this day we also attended Velvet Acid Christ and Suicide Commando shows, but comparing to other ones this day it was quite not impressive. The last band was the greatest disappointment of WGT. The frontman of Belgian dark electro project Johan Van Roy definitely was not on the same wavelength with audience. The performance included basically old songs without any hundred-percent hits (surely most of fans wanted it and we did), Johan just drank beer, was hanging on wires and played for fun. 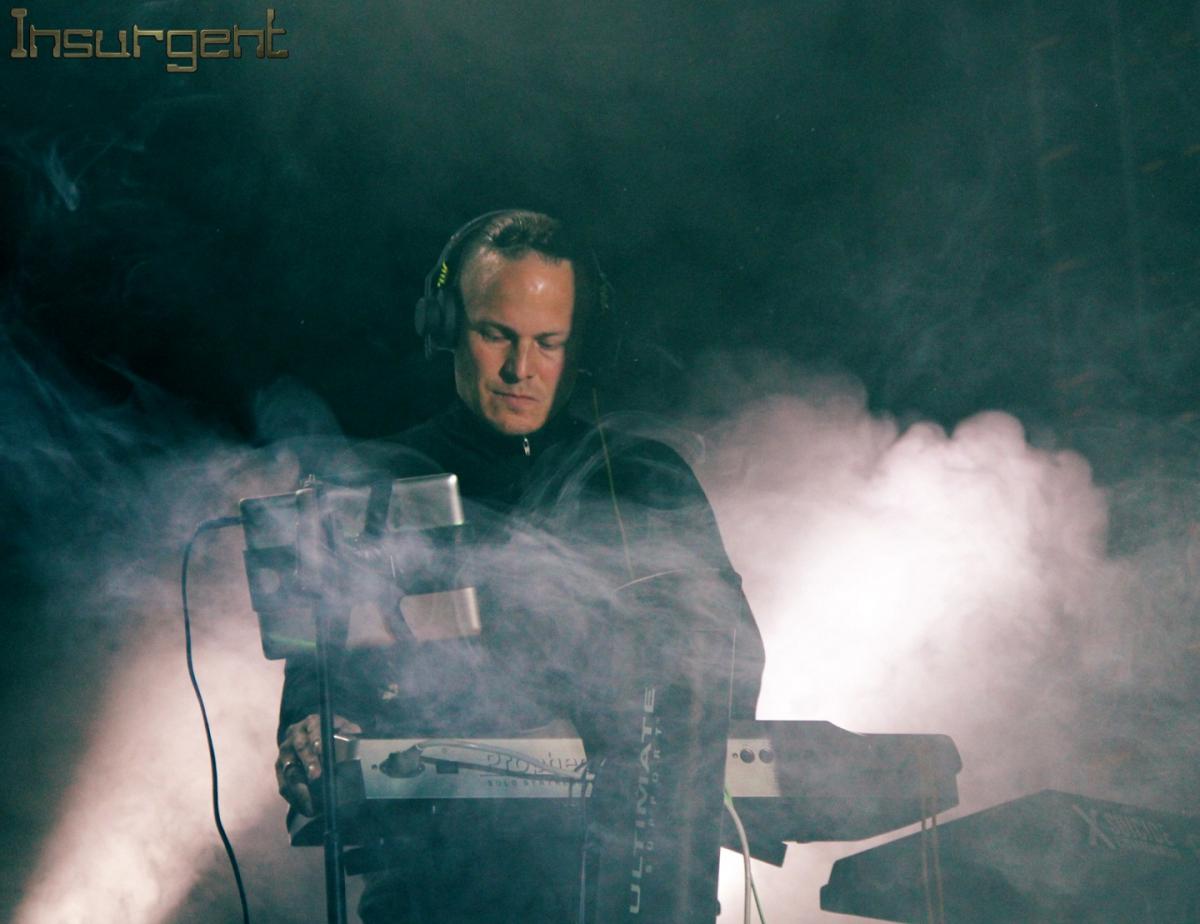 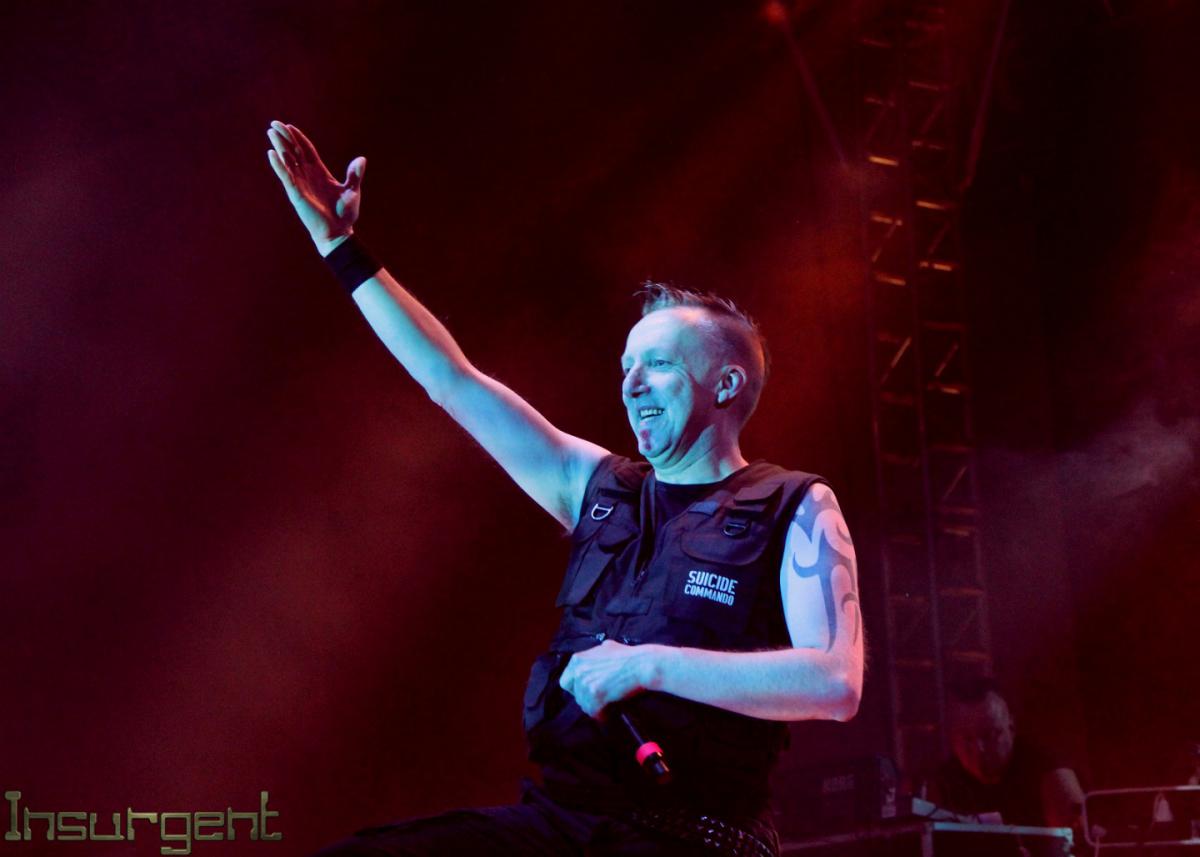 But we’d better concentrate on positive experience of Saturday; one of these was Patrick Wolf’s performance at Volkspalast Kuppelhalle. The gifted English musician made an acoustic show that surprisingly meet the WGT dark atmosphere. He was playing piano, violin, guitar, sang his good old songs, but with a new adaptation for the album Sundark + Riverlight, and it felt something neo-classical in the air. The venue suited the performance so well: we enjoyed the music at theVolkspalast Kuppelhalle with huge chandeliers, carved mirrors, painted cupola ceiling, beautiful stage, lit with static light. We know Patrick as a musician who always communicates with auditorium during his performances and this time was not an exception: he talked a lot to fans about the origins of his lyrics, made jokes and was surprised with many people came to his gig so early (it was at 14:00). As we saw most of the crowd still was dressed as true goths but they really loved the performance of an “indie” English singer-songwriter from South London. 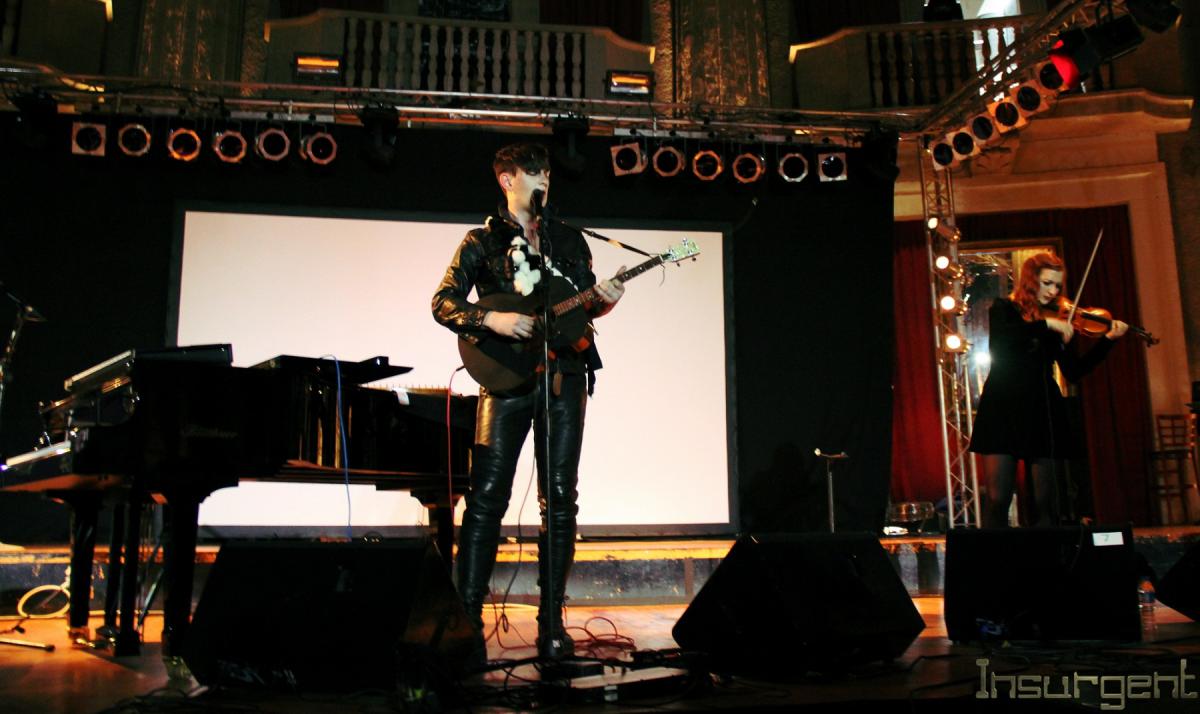 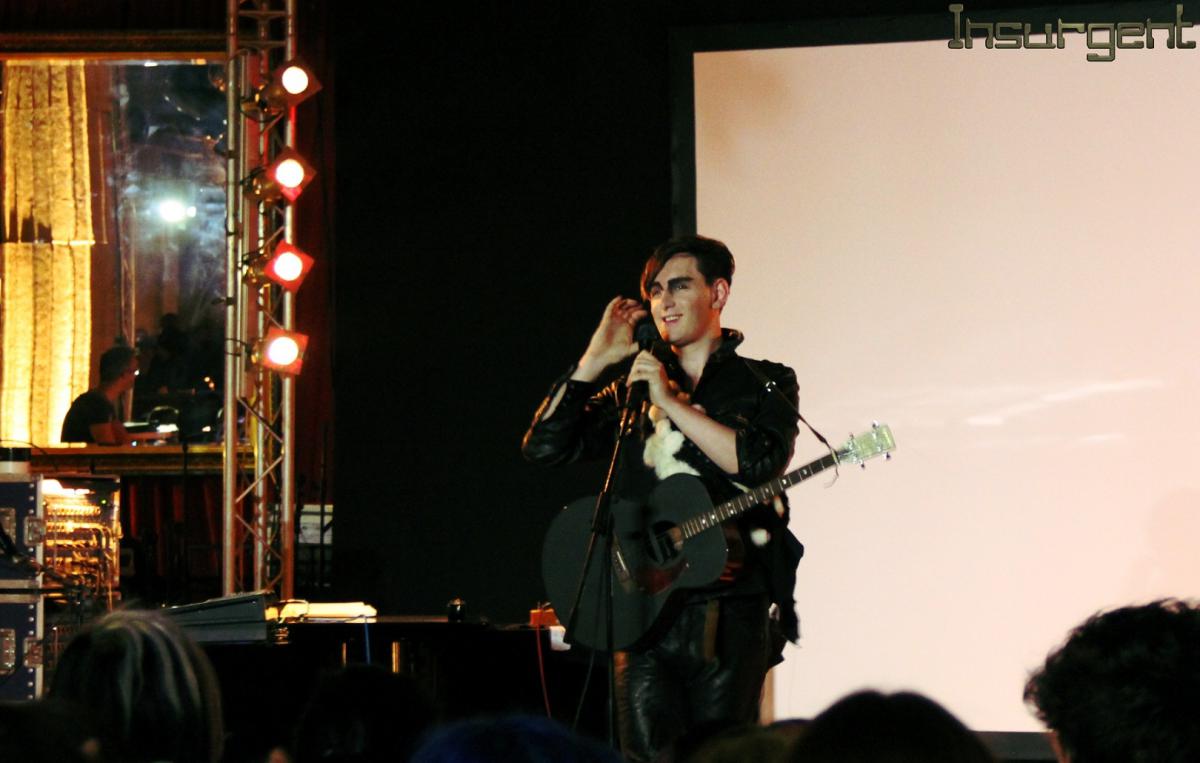 Next venue for us on Saturday was Anker where came to see The KVB, shoegaze/post-punk band from London. Their monotony and air of detachment at first seemed to us avant-garde attractive. Post punk sound reminded of Joy Division or The Horrors. But on our opinion there are still opportunities for this band to make sound more interesting. 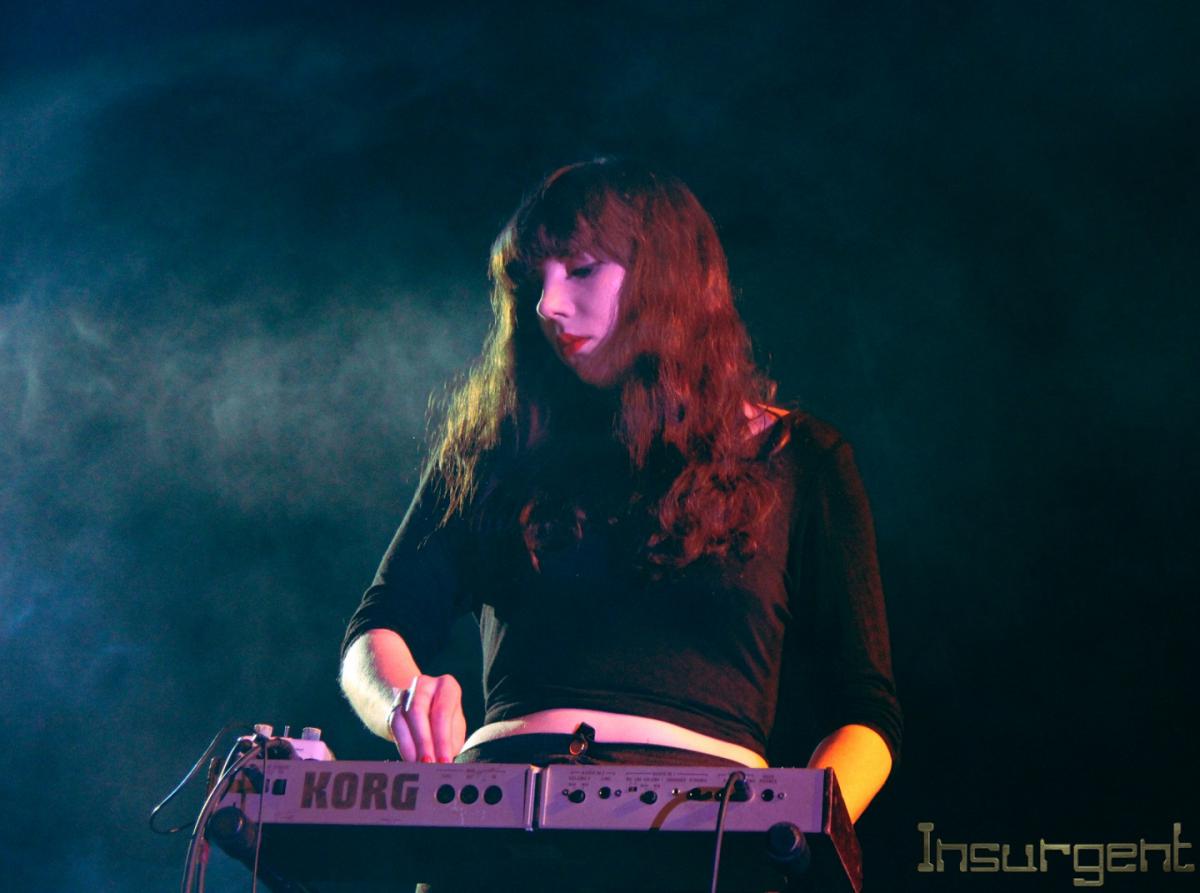 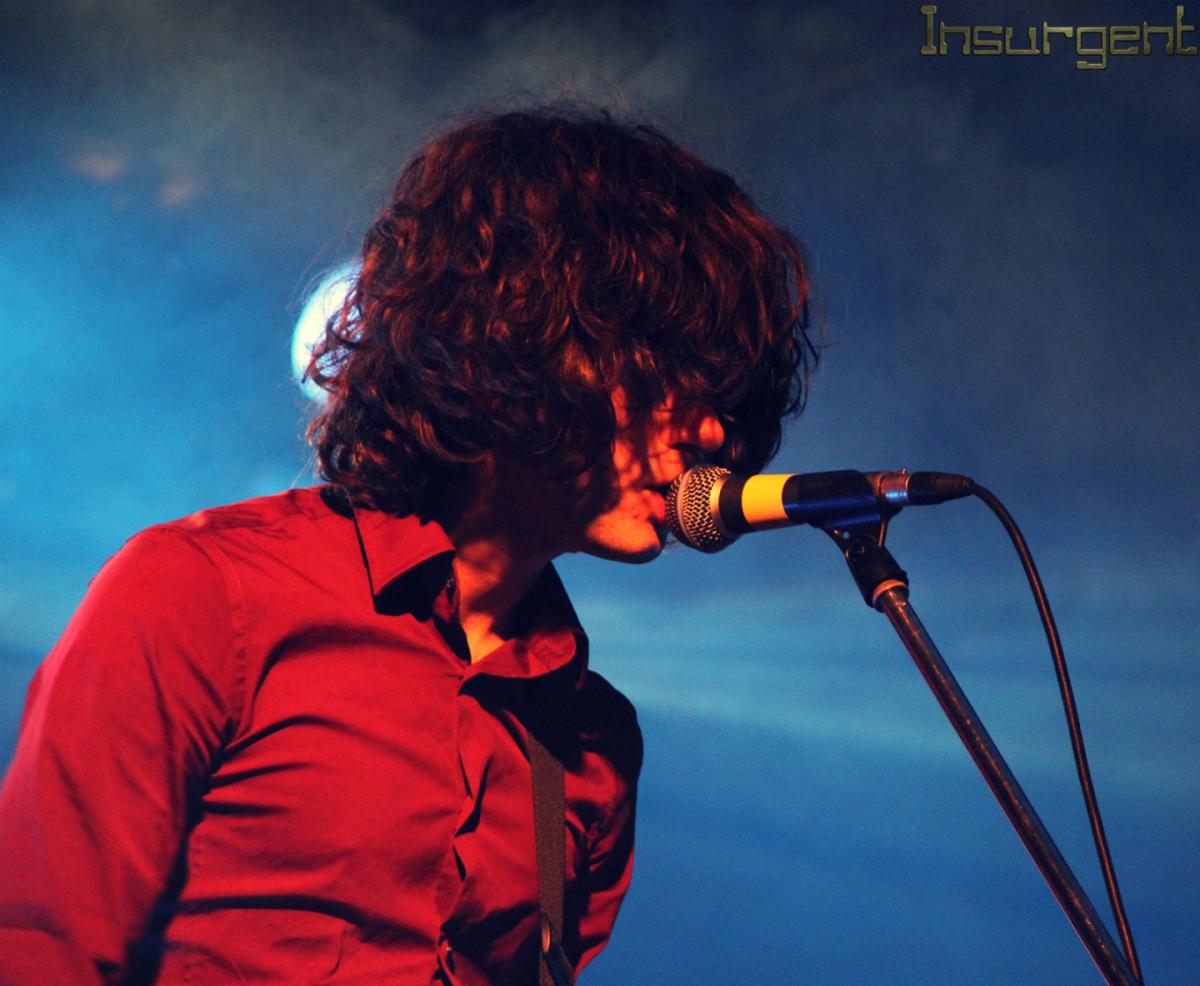 The best ending for this day was British band IAMX who changed location to Berlin some time ago. Great sound, emotional lyrics, catchy melodies, brilliant talent of Chris Corner supported by his band dressed in dark-styled outfit with feathers and laces and striking video background made show really amazing not only for true fans (there were surprisingly a lot of devoted admirers of this indie band), but also for all the people at Agra Hall. 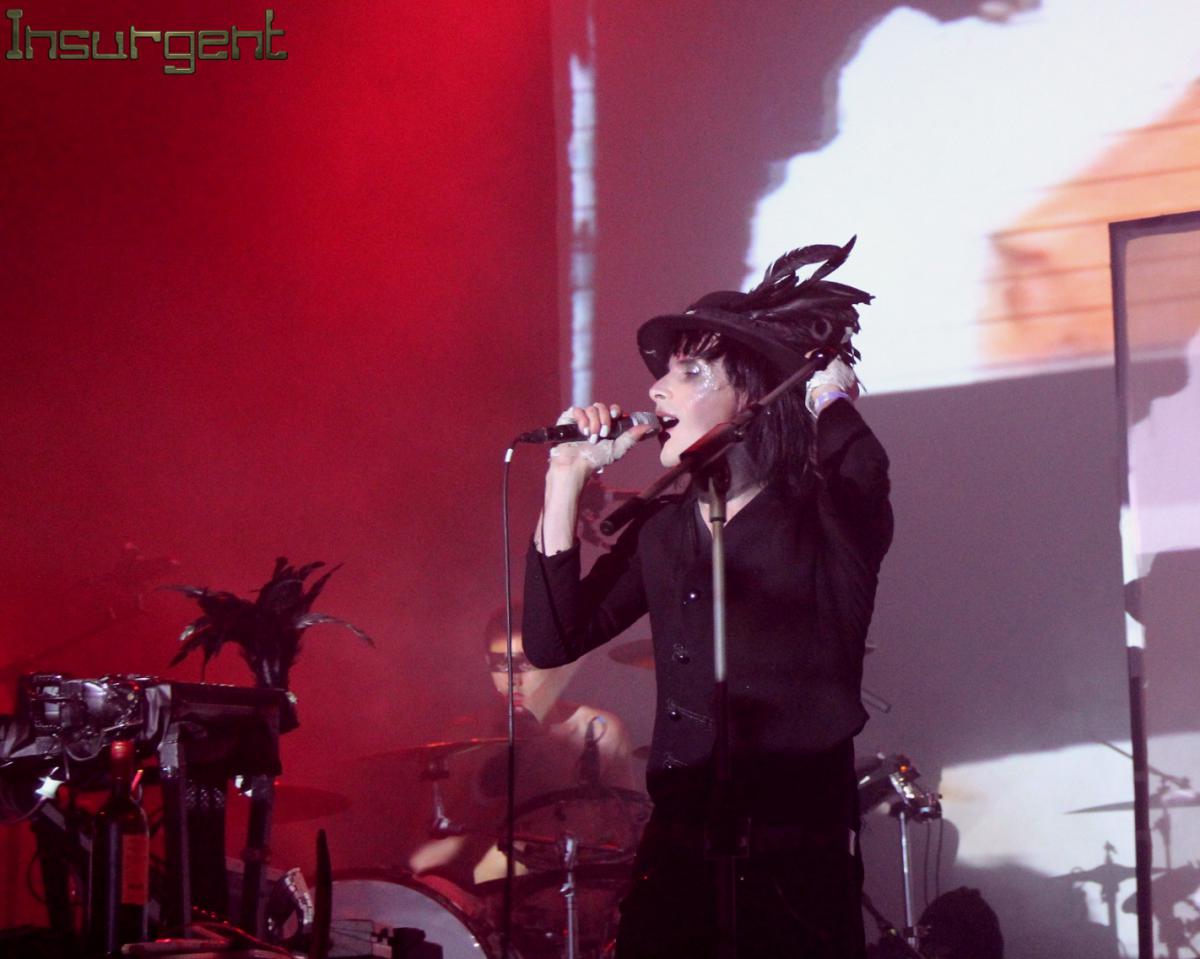 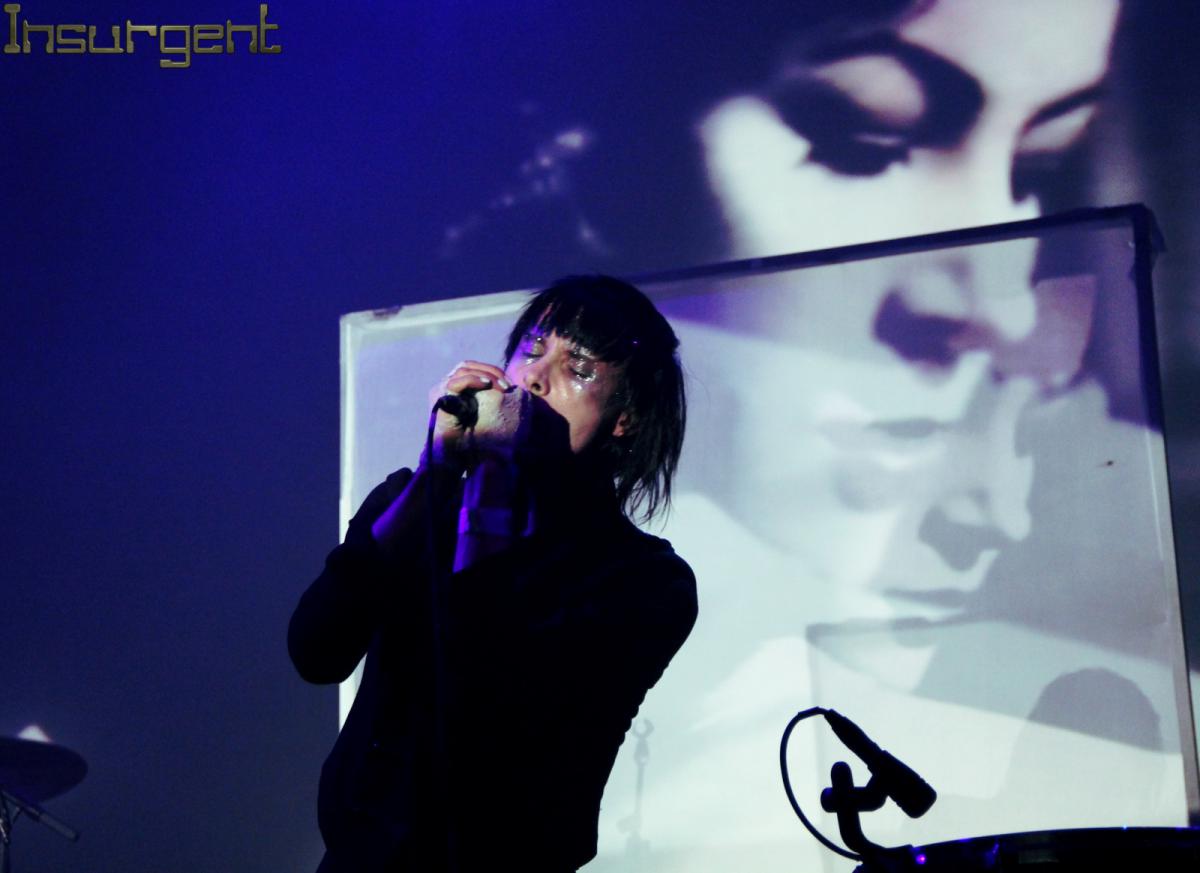 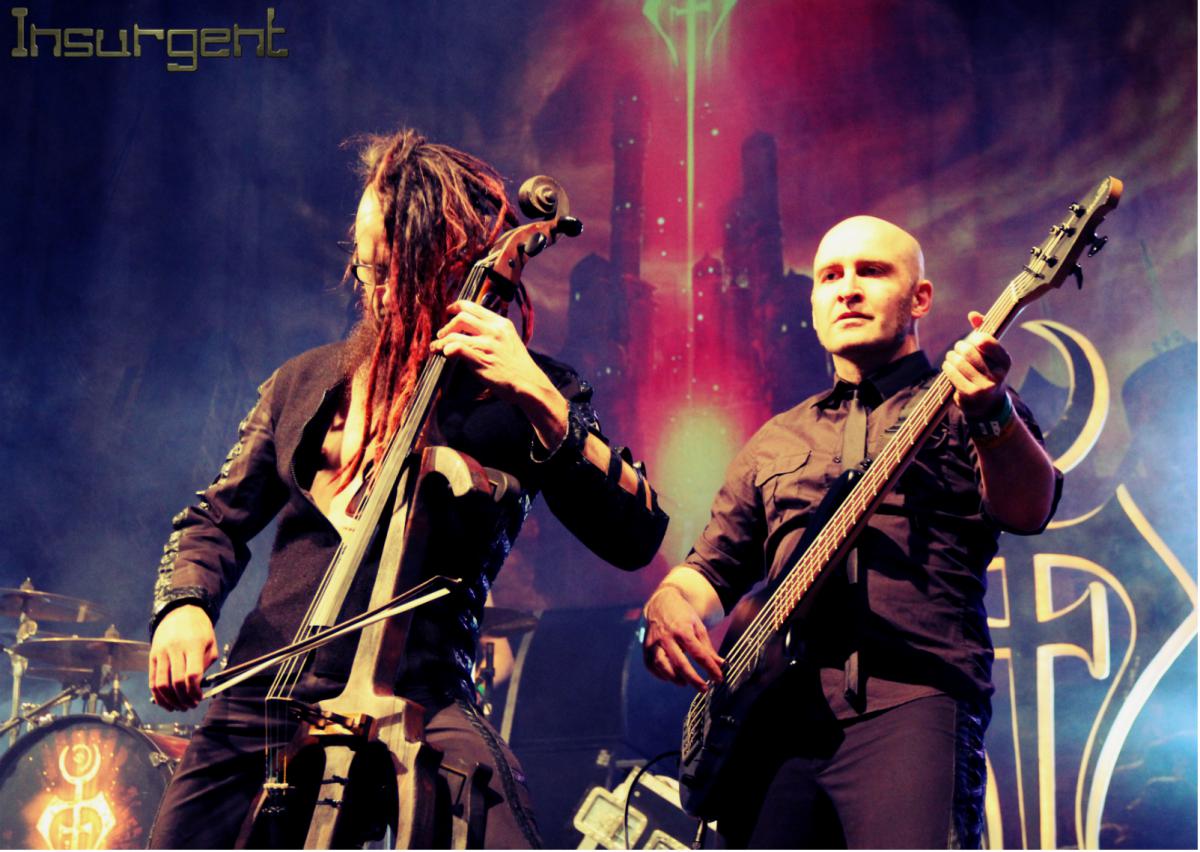 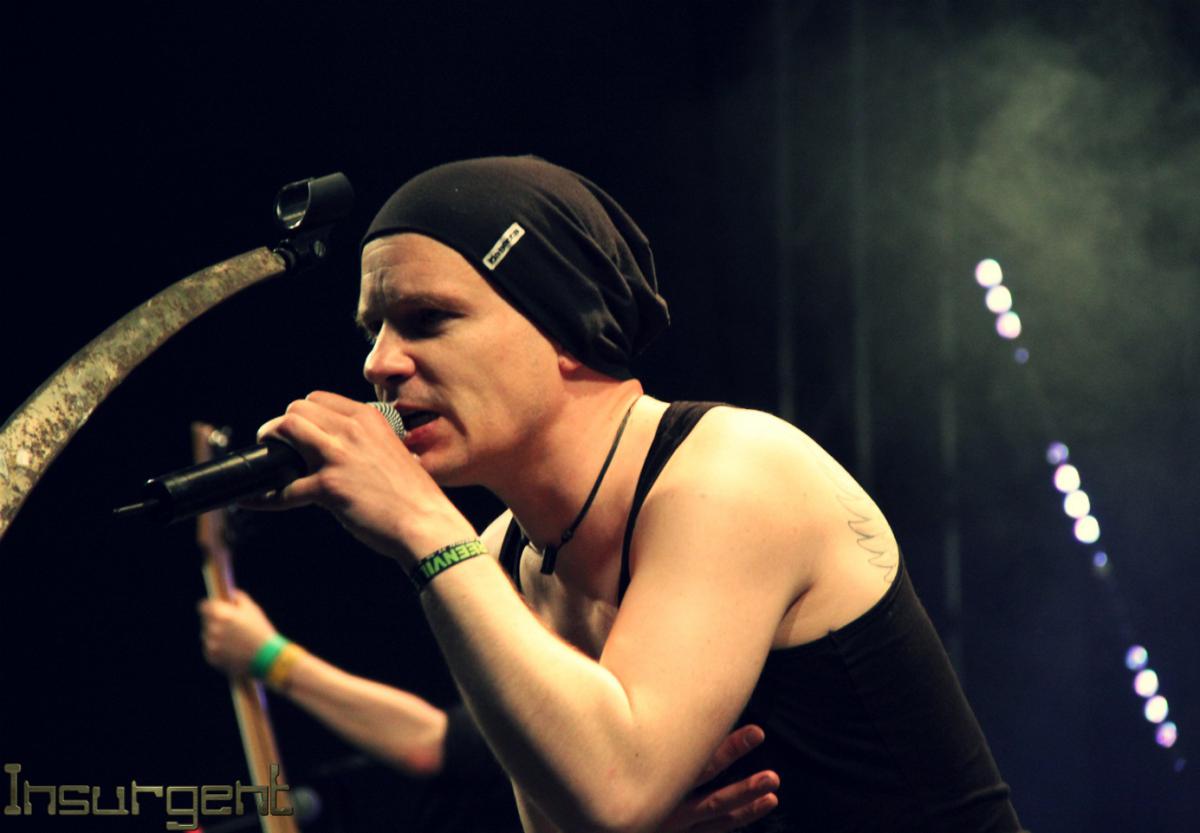 Sunday schedule was made for true metal lovers, especially female ones, and the first band for this day was Lord of the Lost at Agra Halle. This band gains more and more popularity not only in Germany and we saw at Agra many fans from all over the world. The band already played at WGT three years ago, but at another venue Parkbuehne.They started with magnificent symphonic intro and then continued with sometimes melancholic, sometimes extreme aggressive metal saturated the true spirit of rock’n’roll and reminded of the good old motto “sex, drugs and rock’n’roll” with the prevalence of the first component.
Brutal eroticism with prudent stage diving (could you imagine it could be like that) that provided direct access to the muscled body of the frontman Chris Harms quite often characterize their shows. 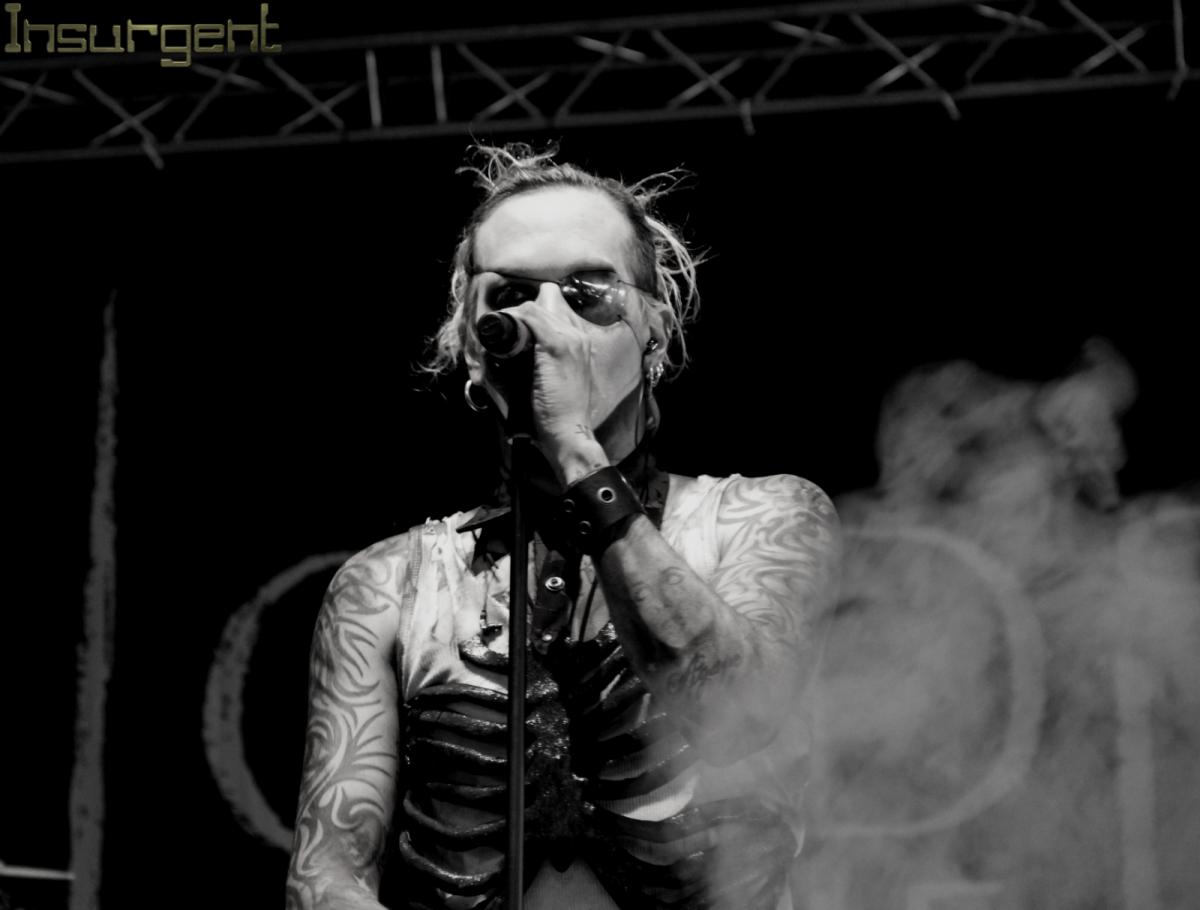 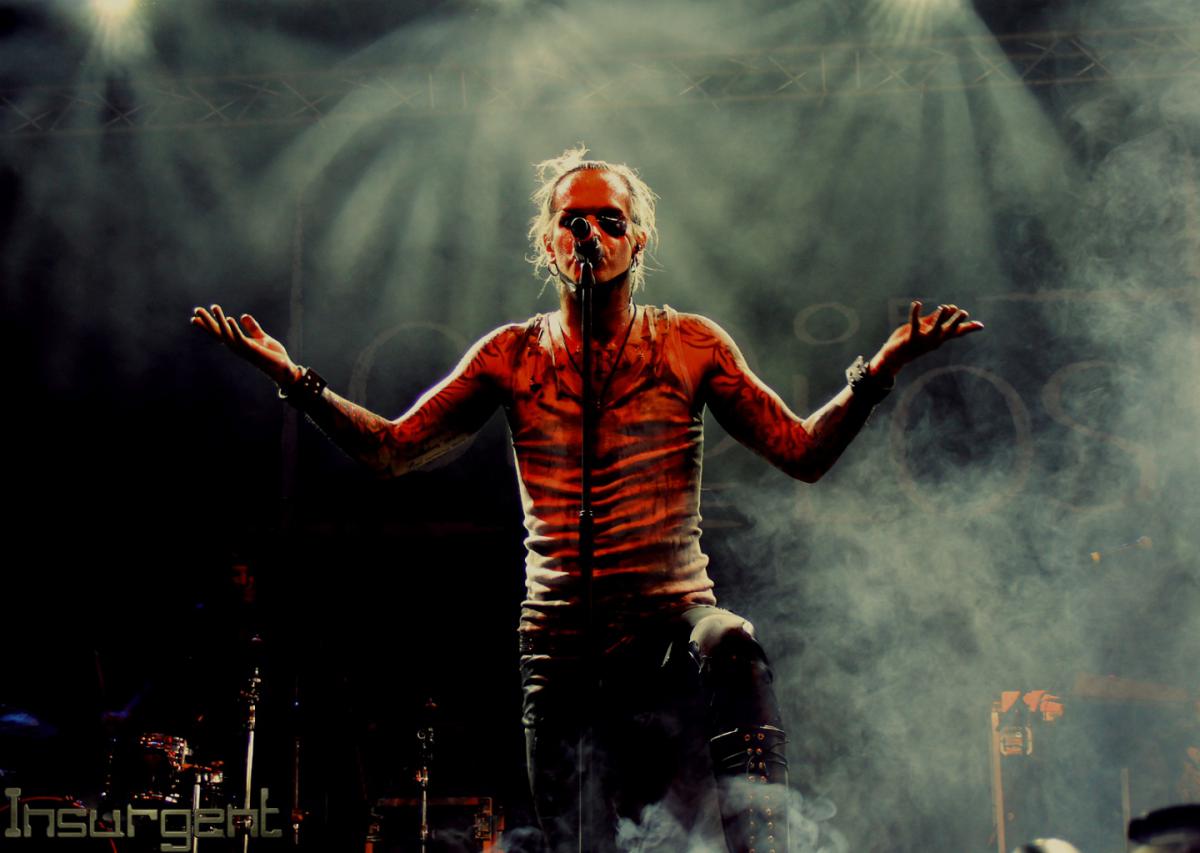 All performance made us fully prepare to see the continuation of german obscene gothic industial rock performed by Unzucht. Since Rammstein became leaders of Neue Deutsche Haerte we saw many odd clones of them. Thankfully Unzucht not just copy the well-known german industial style, but they always infuse something unique. Next on stage was End of Green and they decided to focus on guitars. Performing their songs they played four guitars at the same time, but it was a little bit pointless because guitar parts were almost the same. This day also was full of great dark metal bands performances (Crematory, Xandria, Theatres des Vampires), but we couldn’t clone ourselves, and we had to make our choices. 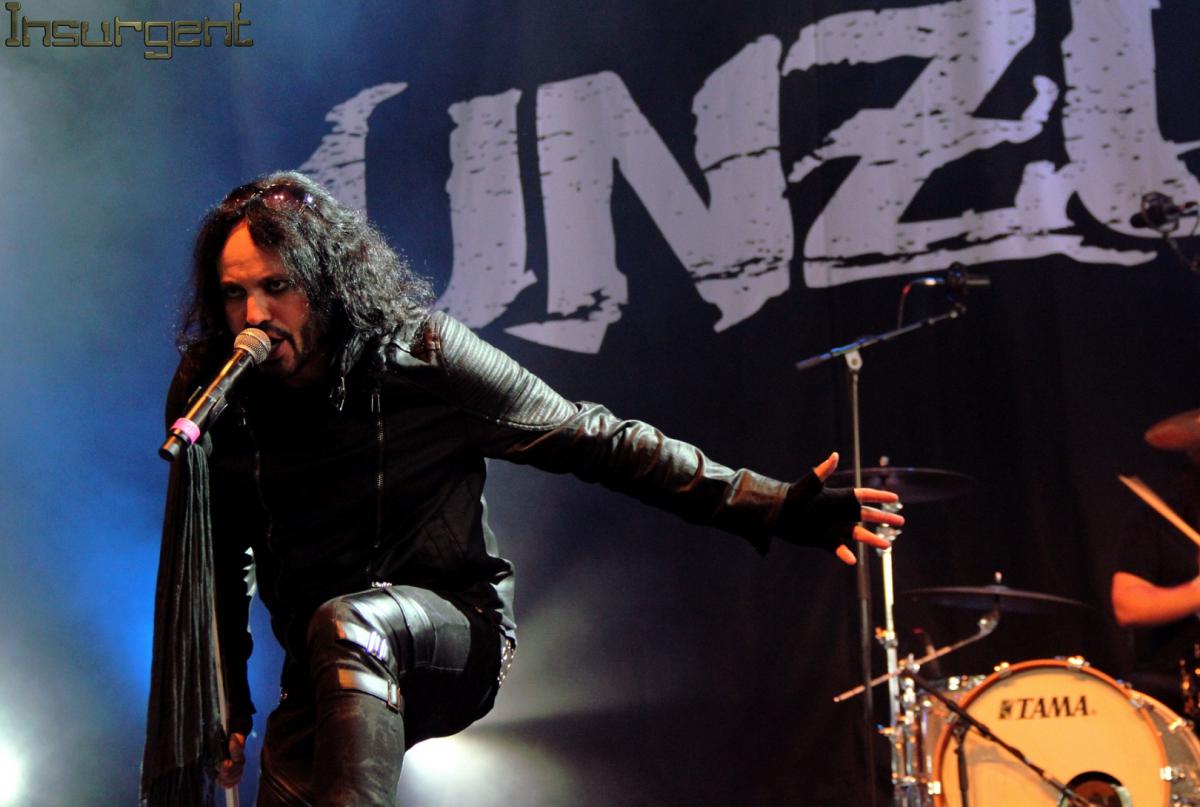 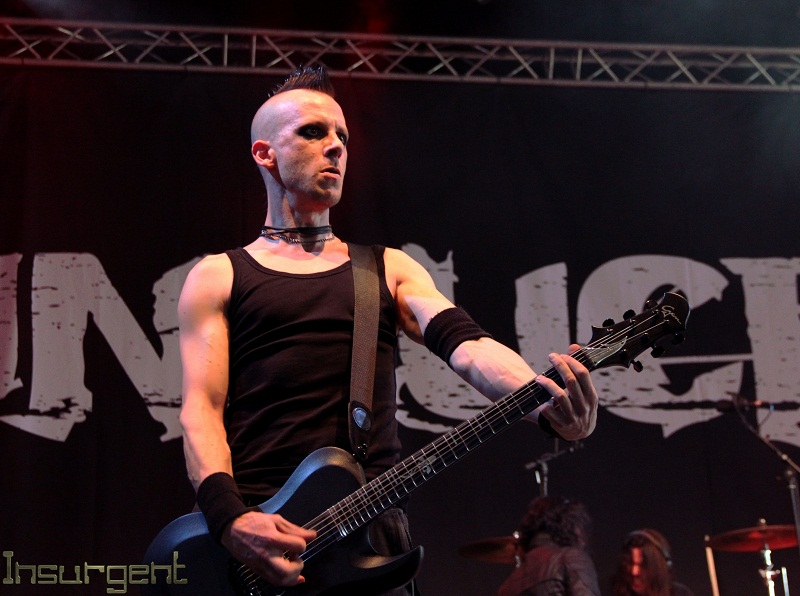 P.S. By the way Lord of the Lost provided fans the opportunity to take pictures and signs at the unplanned sign session. 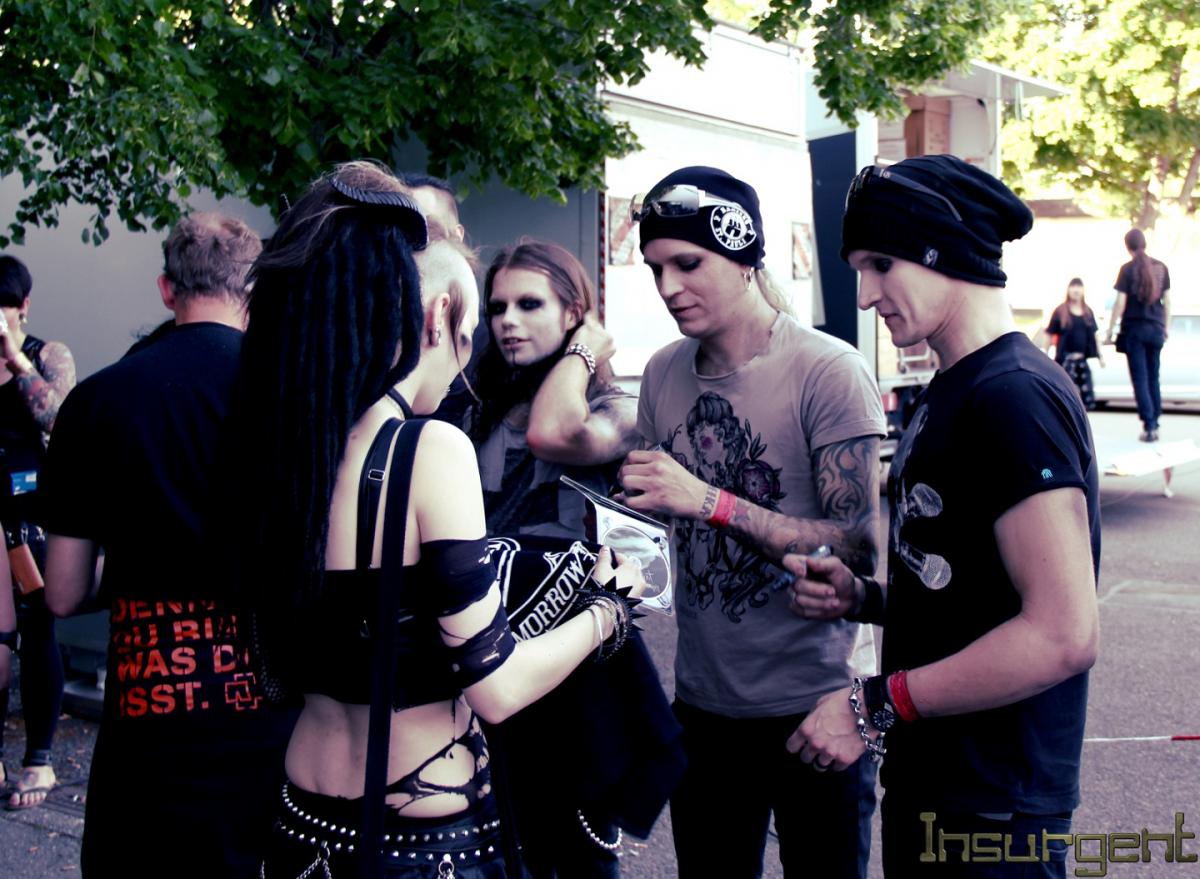 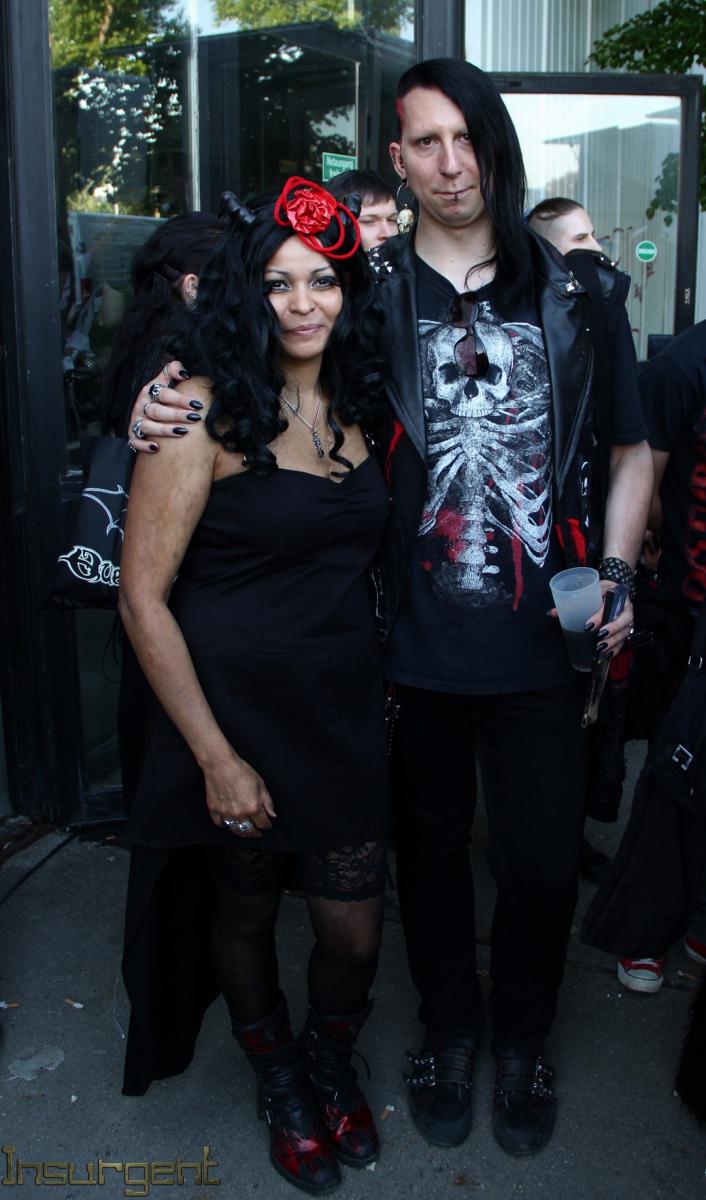 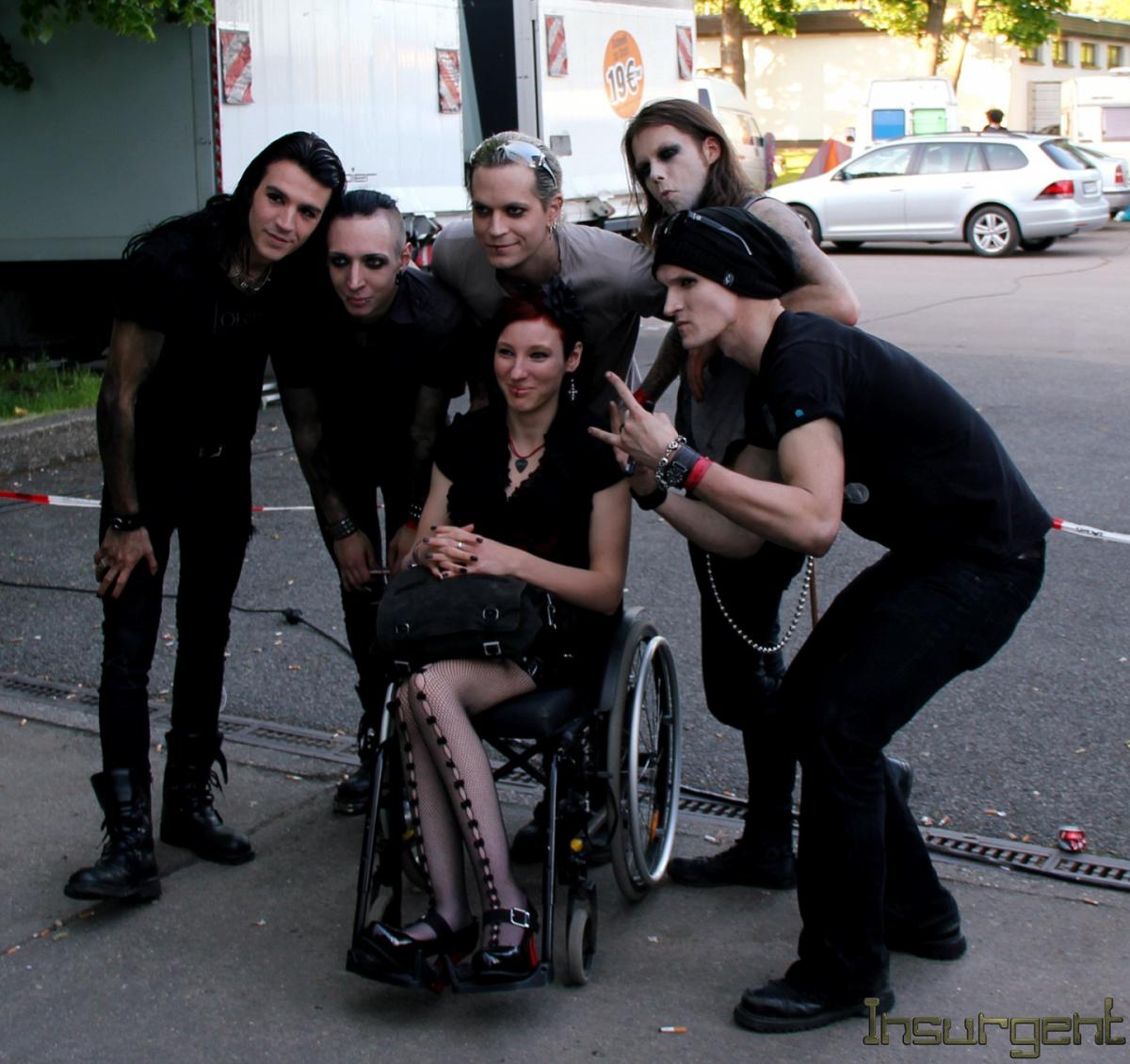 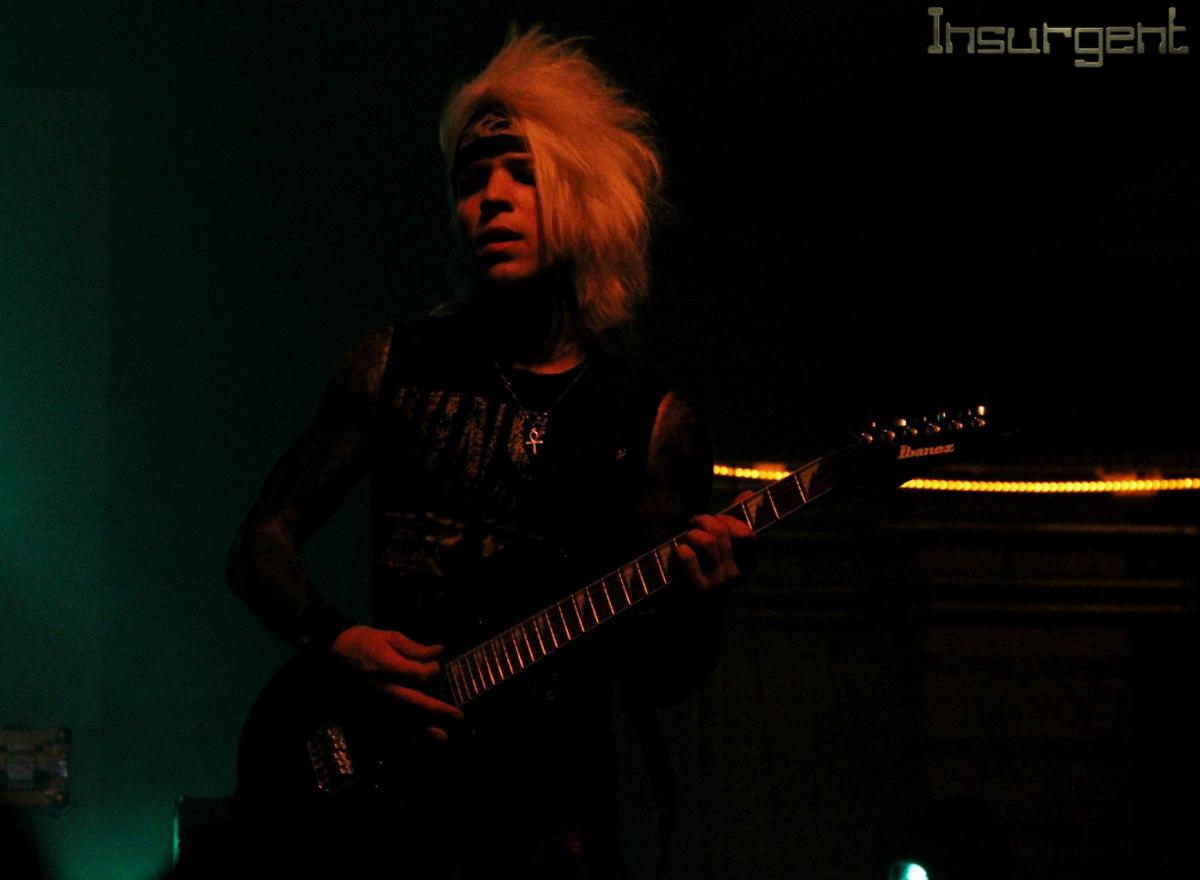 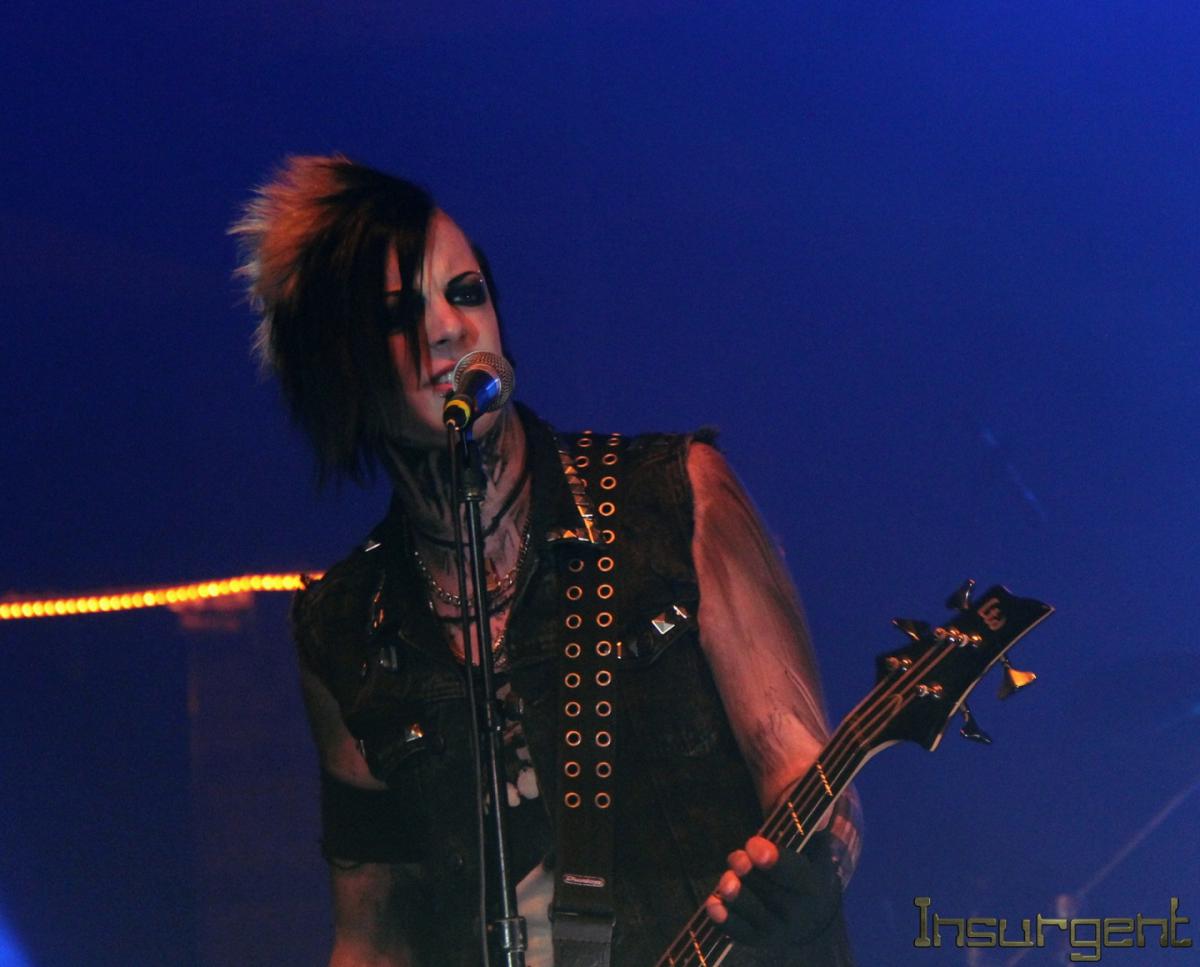 On Monday afternoon we decided to focus on visiting museums and gothic shops. Every year at Agra Halle there are plenty of possibilities to buy clothing by world famous gothic brands and exquisite outfit by local ateliers. At Heidnisches Dorf (Torhaus D?litz) you’ll find stands with homemade wine, knit works, jewelry, embroideries and other handicrafts. If you want to go shopping at WGT there’s important information for you: almost all shops in Leipzig are closed on Monday ‘cause of Pfingsten and gothic fair at Agra Halle closes earlier than other days, but if you manage to get there before closing you may find many items on sale.

While on the subject of cultural part of WGT, there are a lot of museums with free entrance for WGT visitors. This year at the Museum of Fine Arts there were special exhibitions dedicated to Richard Wagner. You could see not only paintings and engravings connected with Wagner’s characters, but also interactive multimedia rooms represent “the highlight of the exhibition, drawing on the vision of a holistic artwork in a contemporary form, intended to provide visitors with a tangible experience” as if was written in brochure. 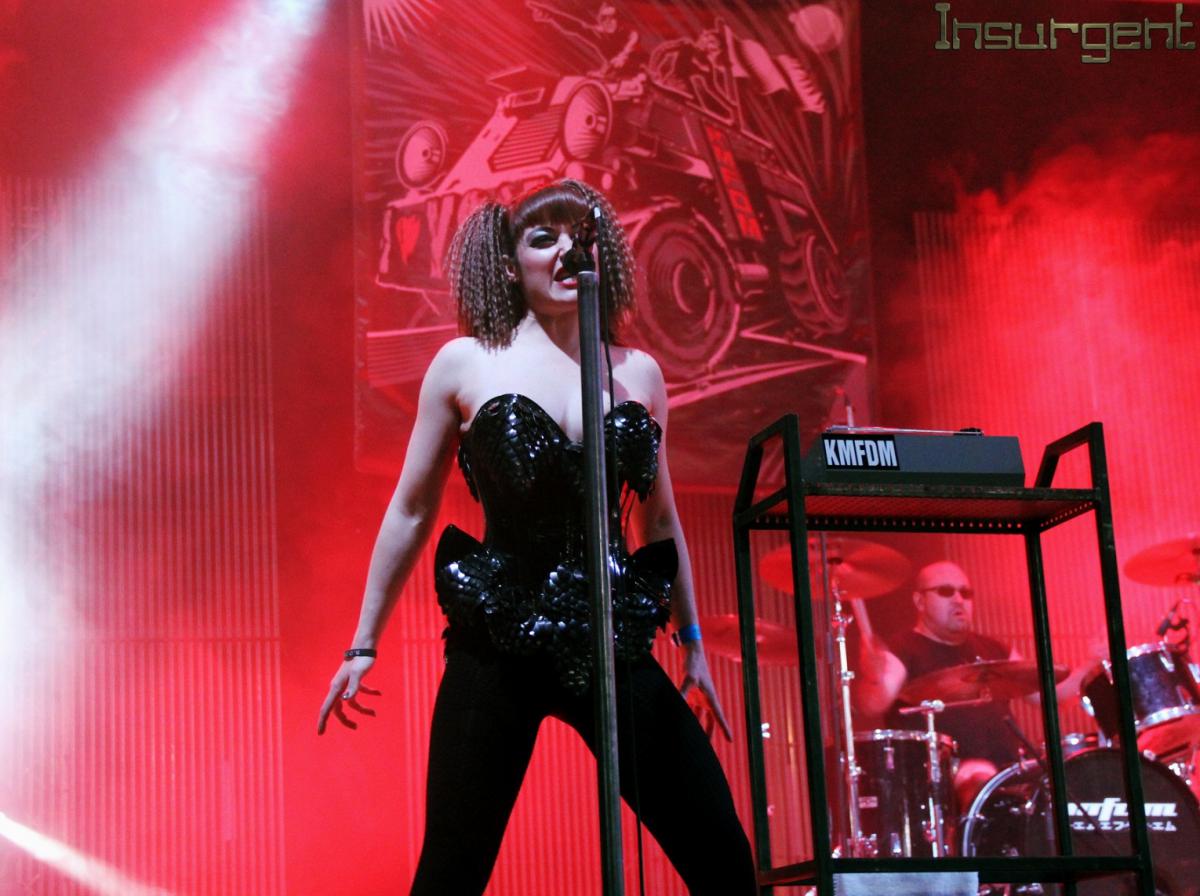 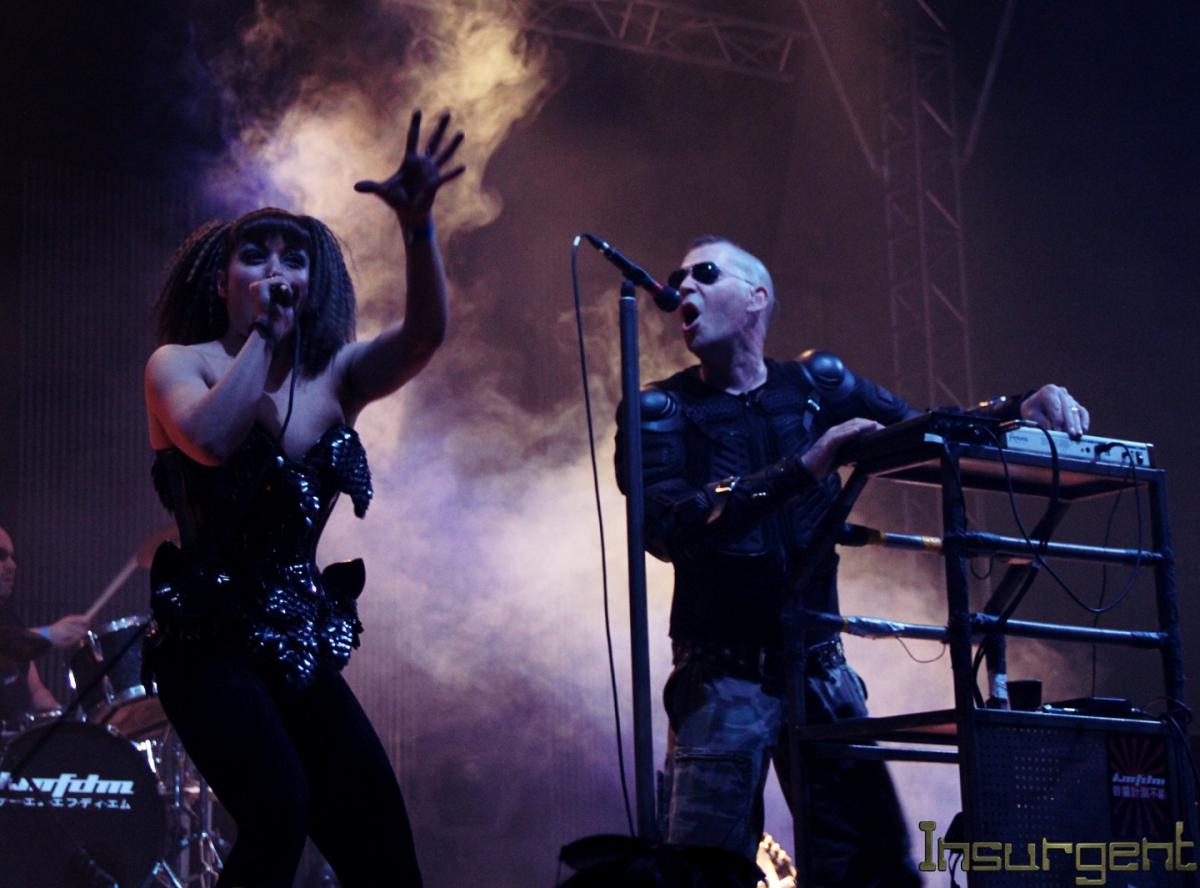 The closing performance for this year was legends of German electro VNVNation. Perfect combination of synthpop and EBM (a word invented by their frontman – “futurepop”) made the energy of industrial dance spread so unchecked. For sure army of devoted fans has risen after their performance.
Being in good spirits we left Agra to get back home next day and to spread WGT fever in Saint-Petersburg and Russia.

Special thanks to Cornelius Brach for accreditations